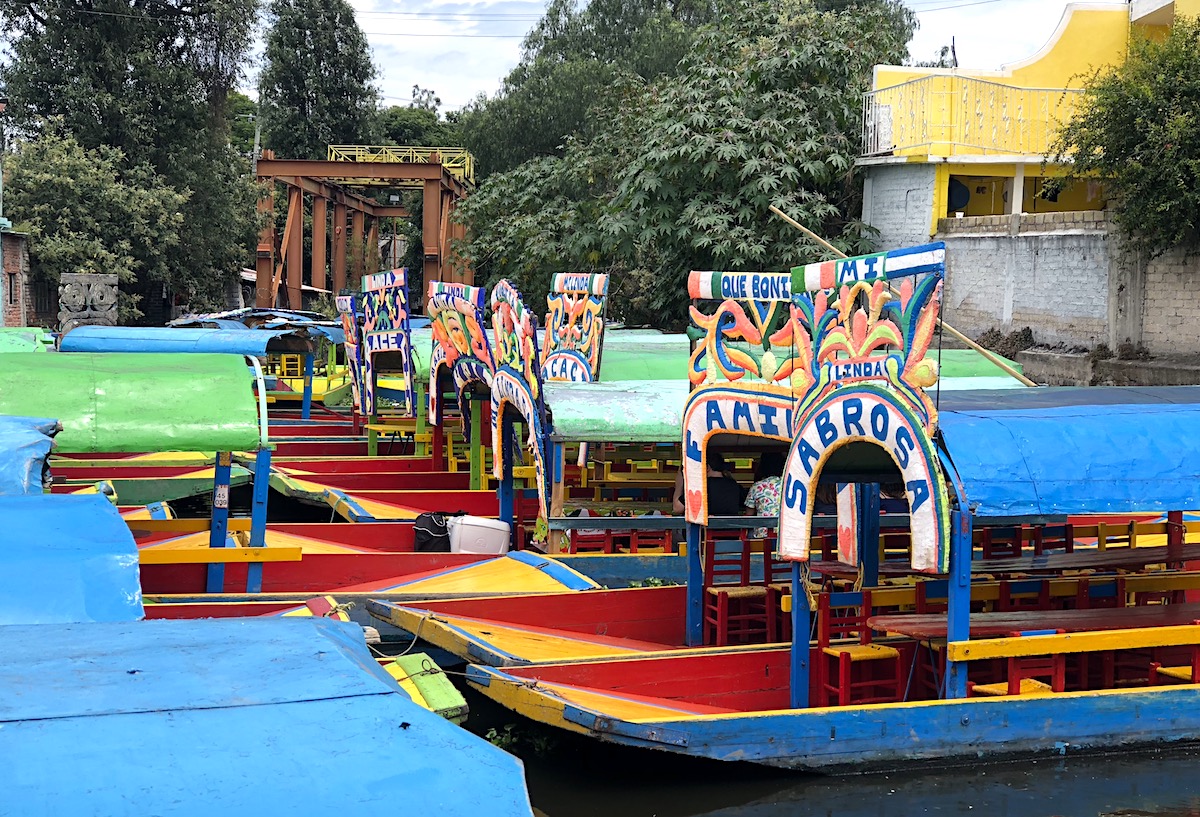 Boat and mind meander in tandem into the dreamy canals – so distant emotionally from the ride and grind of Mexico City, yet still within its limits, only a couple metro transfers from its jam-clogged city center. Not even the sound of an oar, as our captain glides us forward – shimmying across the stern, leveraging gondola pole against river bed – under an expansive, aluminum-clouded sky, through the tranquil, grackled and heron’d, lush green and bursting-yellow vegetated floating tourist traps of Xochimilco.

The canals of Xochimilco (pronounce the ‘x’ as an ‘s’) are nearly all that remains of the great expanse of water that, in pre-Hispanic times, connected many of the settlements surrounding what is now Mexico City. Xochimilco means “where the flowers grow” in Nahuatl, and beginning about 900 years ago, the people of Xochimilco began to build chinampas – floating reed rafts covered with soil and mud to grow produce and flowers. Over the years the chinampas became so loaded with earth that they “took root” and became small islands. In pre-Hispanic times, the people of Xochimilco would travel the canals to sell their produce to surrounding towns and villages, including Tenochtitlan (now Mexico City). To this day, Xochimilco’s chinampa-grown produce is of great importance to the city’s high-browed gastronomes – both Pujol and Quintonil, each frequenting the World’s 50 Best Restaurants list, source their produce from growers in Xochimilco. 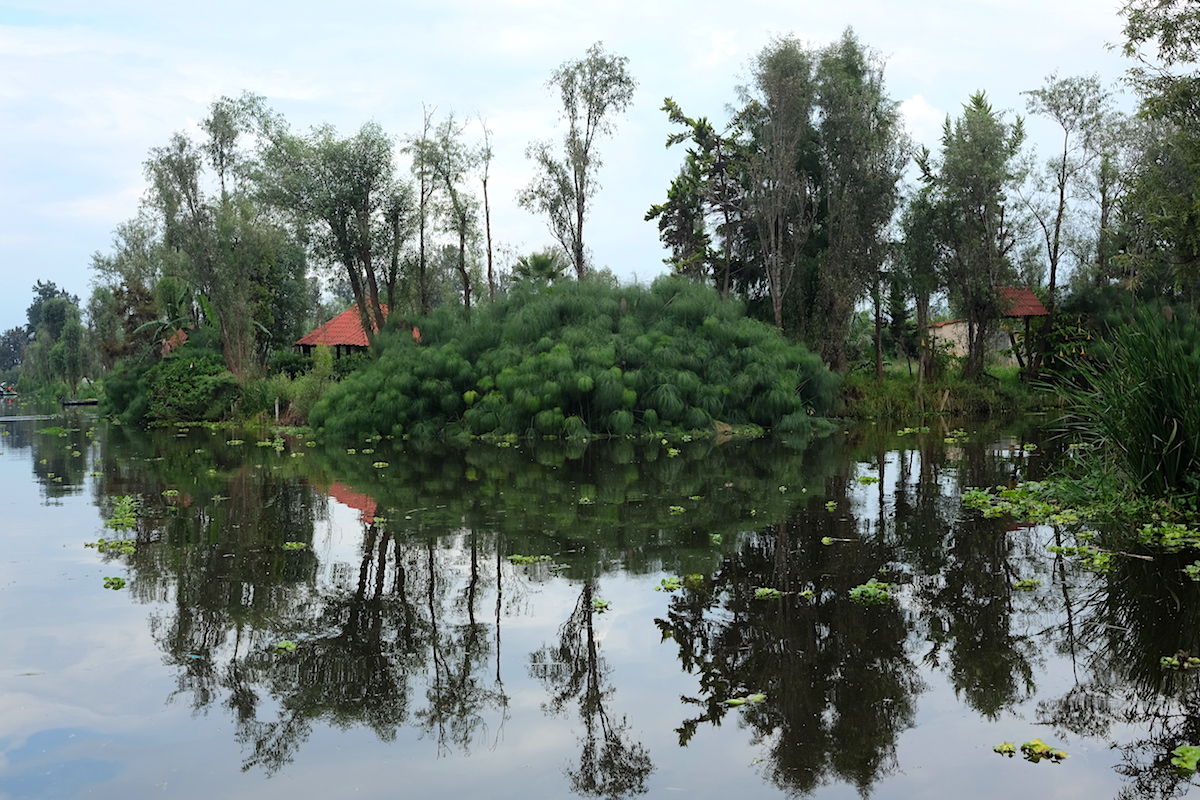 The canals are wholly stunning; writhing with bucolic beauty, wildlife, spacious fields of corn and gourds and luscious lettuces. Long, straight stretches of still water mirror the clouds, and dozens of bachelorette parties and no-need-excuse bacchanals howl and shriek into the open sky. A party of ten – slaughtering beer, tequila, and mezcal – greets us extensively as they pass on their trajinera boat painted gleaming yellow, blue, and red just like ours. Xochimilco is a natural beauty and an enormous party, notorious for the YouTube video, Titanic en Xochimilco, showing a number of boat parties joining forces on a single trajinera, overloading the boat and capsizing its passengers into the canal. I’d heard stories about parties at Xochimilco, that at least one person drowns drunk every year. I tell this to our captain, and he just laughs, assuring me it’s only urban legend. He’s witnessed puking, for sure, but no grave danger.

Other boats sidle up next to us selling all manner of homemade snacks, trinkets, and booze. A trajinera of mariachis approaches, offering to sing us “Cielito Lindo,” the perennial gringo favorite. Xochimilco – UNESCO World Heritage site and world-class tourist trap. Stop at a chinampa and pay to use the bathroom – which is a necessity with all the beer you’ll be drinking. Pay to look at a farm or a petting zoo. Pay to enter the famed Isle of the Dolls, a creepy hanging memorial of mossed-over and flame-scorched dolls. Yet, this is the economy of Xochimilco. Pretty much everything for sale is categorically fun, and no one’s driving a Rolls Royce to work, if you know what I mean. 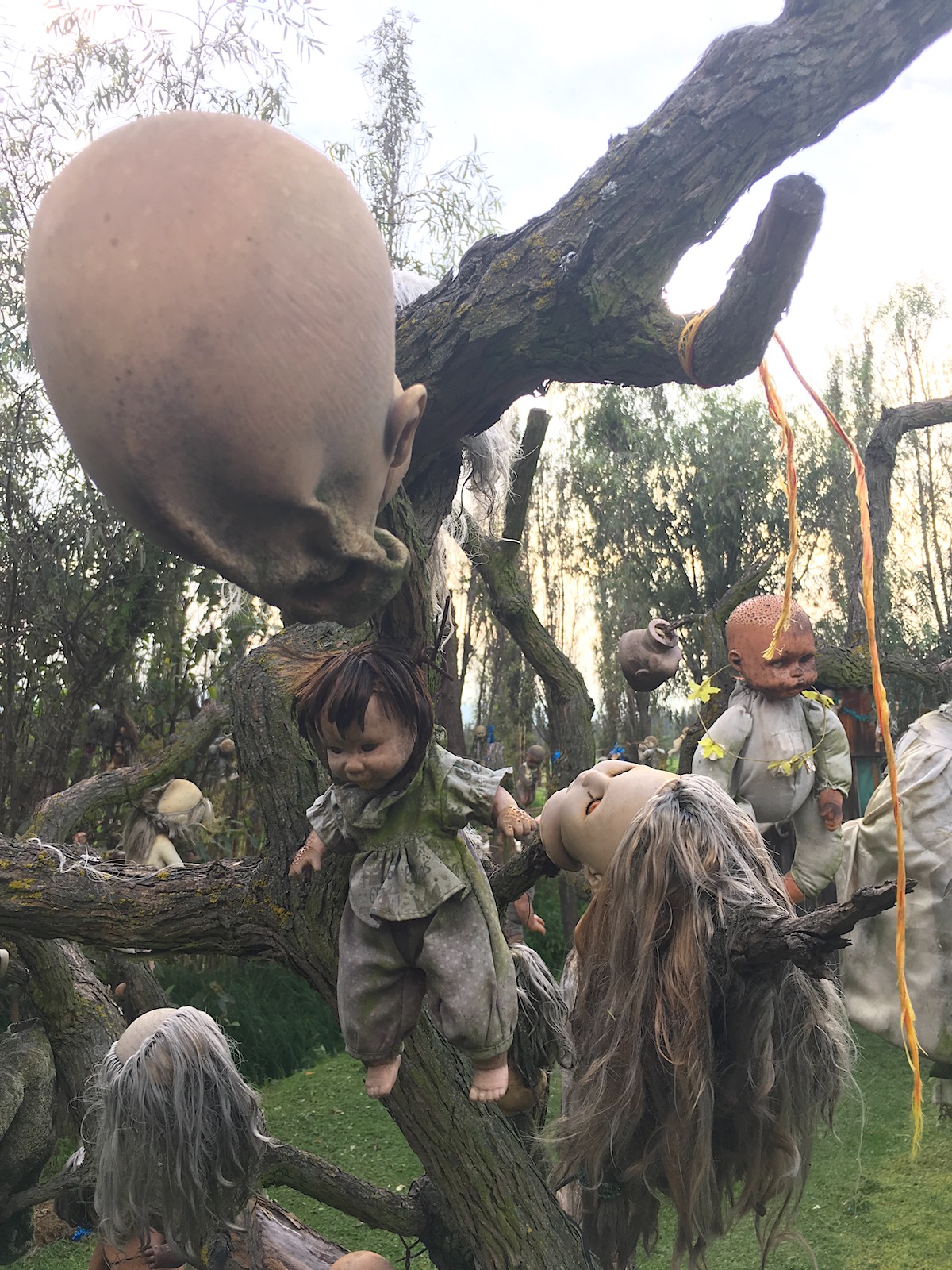 Xochimilco is also one of the remaining homes to the axolotl (Spanish, ajolote), a neotenic salamander that’s severely endangered due to pollution, loss of habitat, and the introduction of invasive species like tilapia and perch. There are a number of ajolotarios among the canals, where they raise the slimy buggers, helping to save them from extinction. We had a couple salamander freaks on our boat, so we stopped at a smiley, rugged old man’s homestead for a look. He showed us a small, hand-dug inlet, blocked off from the canal where the axolotls are allowed to live free from the massive grasp of tilapia – even if they reach full size (about 18 inches), the tilapia can still suck them in, he told us. He brought out a bucket for us to sample a look. Our New York friends, with an axolotl named Squirt (Spanish, Esquirt) waiting for them back home, were completely dazzled at the size of them. It was a comforting, homey operation. An old farmer/nature-boy working his clothes dirty growing acacia trees to boost the Mexican yellow butterfly population, harvesting produce, and introducing tourists to his pet snapping turtle. He asked nothing for the tour, but we tipped him for the trouble. 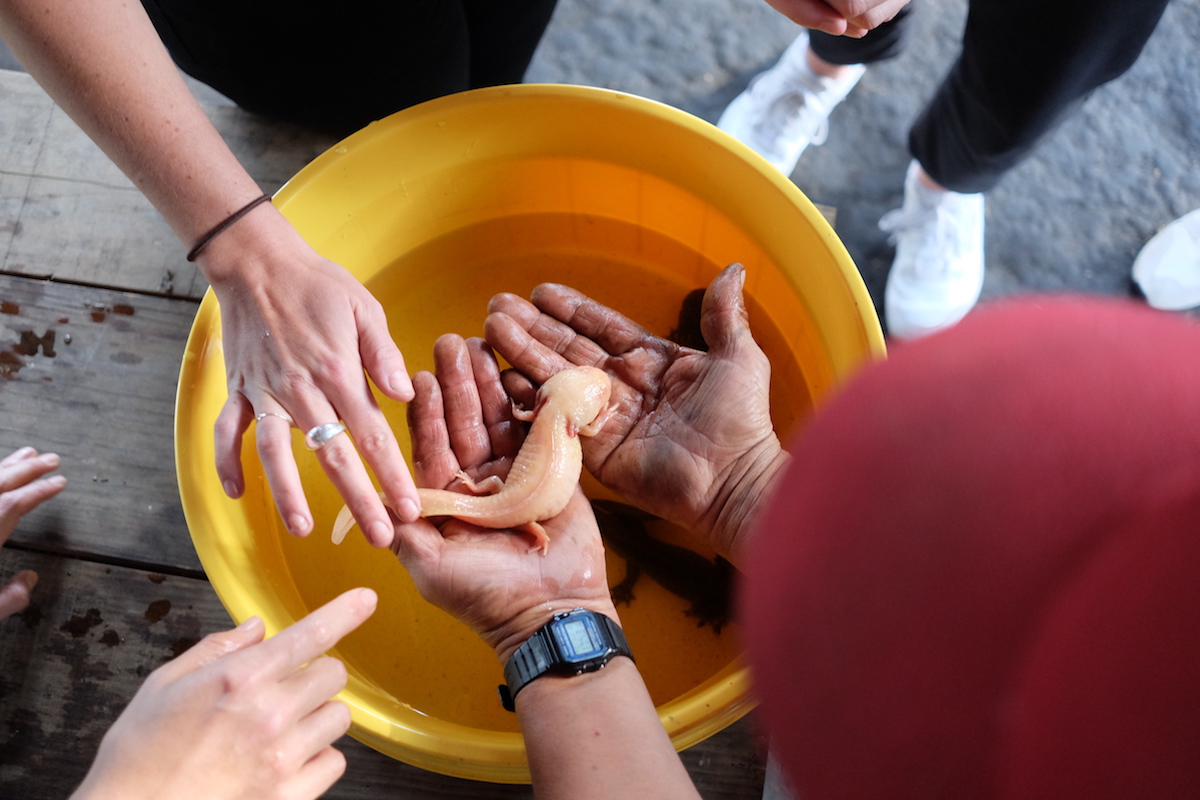 At our last stop we bought homemade pulque and snacks from a man who’s been contracted to his impressive crabgrass lawn of a chinampa for 65 years. He started out as a boy, tending to property maintenance, and now watches over the entire operation. We still had to pay to use the bathrooms there, but some of us snuck off to pet a cow for free. On the ride back, some parties were dying down but others just beginning. Xochimilco is like a bonfire party in the forest – come in close for the festivities or wander off silently in the woods.

Each trajinera costs $500MXN an hour, for the entire boat, and can fit up to 18 people. Tours are typically 1 to 4 hours, and you can bring your own snacks and booze if you’d like. We set out from Embarcadero Cuemanco Xochimilco, which I understand is a bit more vast and, therefore, more peaceful. But there are a number of options, each with its own collection of shops and restaurants at the embarkation point.