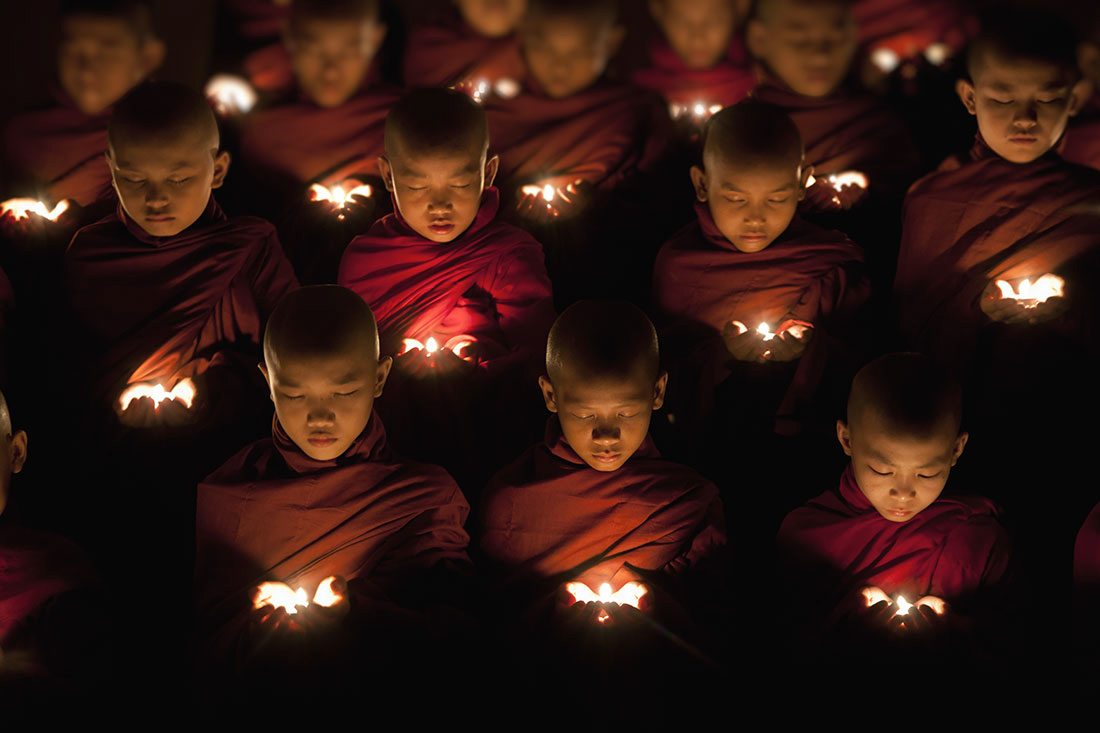 Passage to Burma: An Interview with Photographer Scott Stulberg 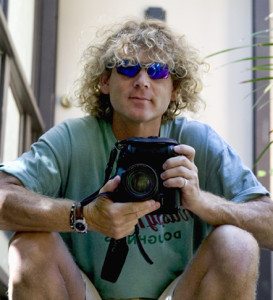 When he was around 10 years old his parents bought him his first camera: a little plastic Instamatic. He didn’t know then how much would that influence his life to later become his career. Born and raised in Los Angeles, Scott Stulberg spent most of his life in this city and just recently moved to Sedona, Arizona with his fiancé, Holly, pursuing a change of pace. He began to travel when he was 13 years old and, along with a darkroom he had at home, he fell in love with photography and travel.

Nowadays, not only a photographer, Scott also loves teaching photography and the digital workflow. “Being around students that love all of this as much as I do, is very addicting”, he explains. “I guess I can never thank my parents enough for helping me find my passion.” He also teaches at UCLA extension programs and organizes photography workshops in Burma [Myanmar].

Scott Stulberg recently published a photography book called Passage to Burma, where he showcases the life in this part of the world through beautiful imagery. I had the opportunity to ask him a few questions about travel, photography, his book and Burma, after falling in love myself with his marvelous work. I hope you enjoy this interview and photography, and I recommend you to read until the end, you won’t be disappointed with his anecdote.  😉

What’s your relationship with travel?

I started traveling to far-off places when I was very young to hang out with family members and I met some amazing people. I even moved to Israel for about six months and that was a pretty eye-opening experience. I think traveling to faraway places at a young age made me realize how much bigger this beautiful world really was. I love interacting with all of the locals and never want to feel like a tourist. I love understanding their lifestyle and feeling like I am one of them. There is nothing like being on another part of this planet, on any given day, and seeing what the rest of this beautiful world has to offer. I absolutely love it! 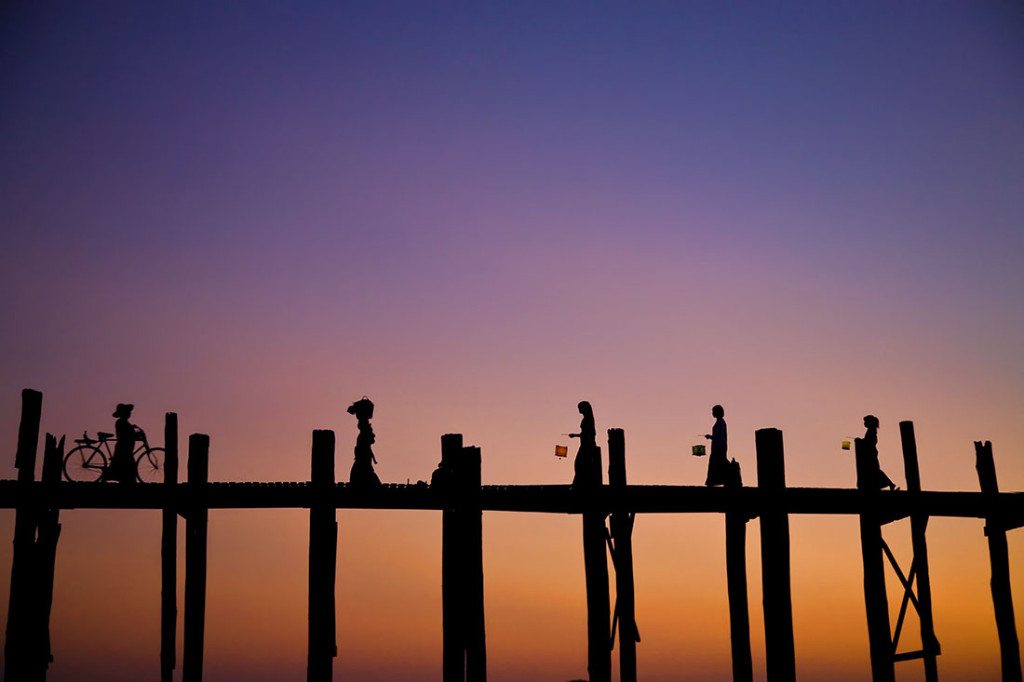 When did you visit Burma?

I have been to Burma many times since my first trip in 2001, the beginning of a great love affair! Back then, it was totally different and very much like my first time to Cambodia in 1996. The government was much more hard-core and there were not a lot of tourists. We had to make our way around the best we could without a guide and looking for the best photo ops. Now, after being there often and doing workshops there, I know how to be at the right place at the right time. I absolutely love this country and their people so much, it is definitely my favorite place on earth. 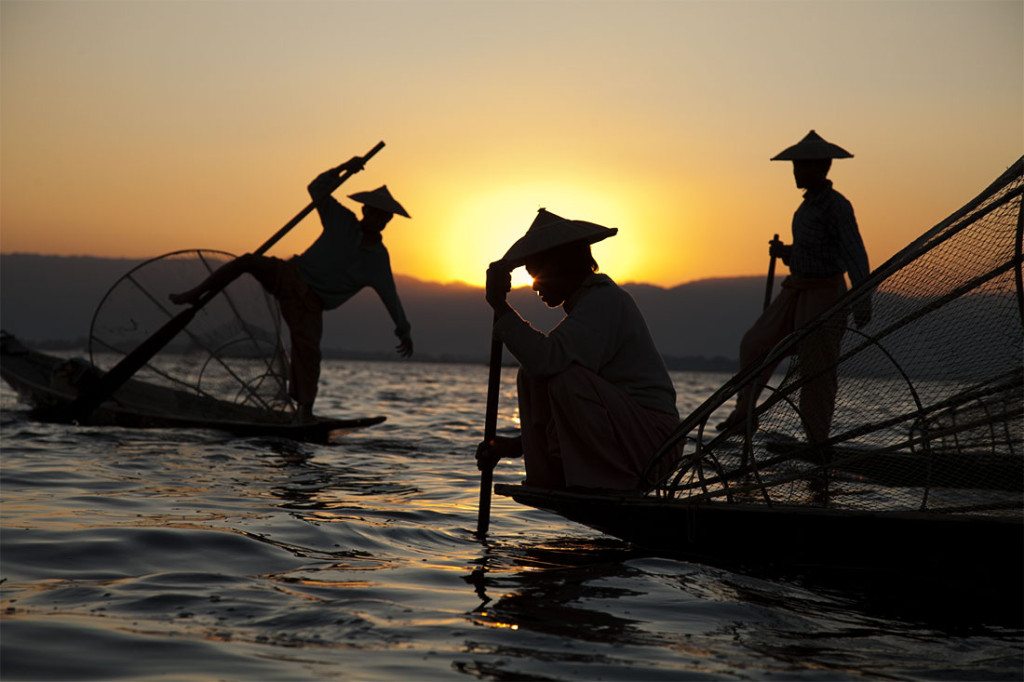 What’s so special about it?

I would have to say my favorite part of Burma are the people. They are as sweet as anyone you would ever meet and they are always smiling. I love the fact that most of the women and children wear Thanaka face paint with designs that are different every day.

I am totally addicted to being around all of the little monks. I have been photographing them since 2001 and I have become friends with many of the Monkmasters in charge of the monasteries. They bring me into their world and ask me to stay, they love my photos and it’s incredible seeing them framed in their monasteries when I come back to visit. I look forward to seeing my little monk buddies more than anything.

And of course, the monasteries themselves are breathtaking. Places like Bagan, where there are over 2,000 temples in every direction it’s mind boggling. Pure eye candy in every direction. In the world of Burma, it’s one thing to explore yourself, but it’s another to have someone with you that knows every inch of this beautiful country. 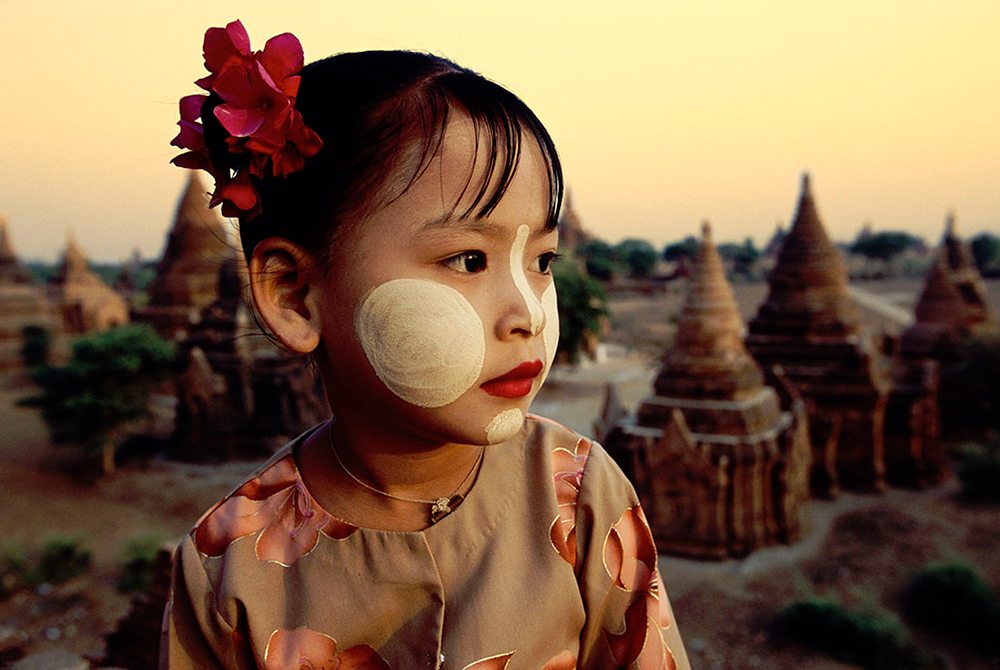 What is your book about?

My book really shows some of the aspects of this beautiful place from the culture of the monks, to the monasteries and pagodas, to the everyday life of people selling their goods on the street. I love showing different areas and lifestyles from the unique one legged rowers in Inle Lake, to the Ring Necked Padaung women, to the insides of many of the stunning monasteries. I have also captured what it’s like to start out as a Novice monk at the age of nine or so, with their head shaving ceremony.

I wanted to portray a beautiful place that has gone through so much with the military junta making it tough on them for so many years. Living under military rule has been hard but things have changed now, possibly too much as more hotels are being built everywhere for the increase in tourism, big companies showing up all over and actually the landscape has changed with billboards and influx of tourism that this country really can’t handle so easily. 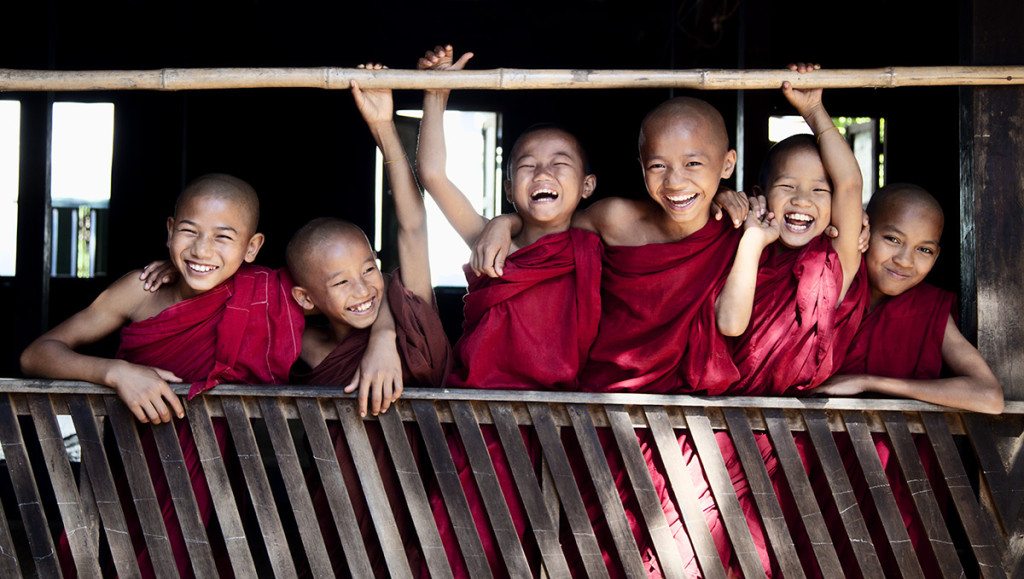 What would you recommend to a first timer in Burma?

I would have to say that one place you actually cannot miss is the town of Bagan. To me, this is really the quintessential Burma and you can feel like you’ve gone back in time, a long time ago! The grandeur of these temples & pagodas all along the Irrawaddy River is just insane.

If you can’t make it to some of the other cities in Burma, plan on spending some time in the peaceful town of Bagan. But also plan on getting up early so that you can photograph the incredible sunrises, especially from the top of a tall temple. You might even capture some of the beautiful hot air balloons on the horizon which can be pretty breathtaking at sunrise with the temples and fog and smoke in the foreground. 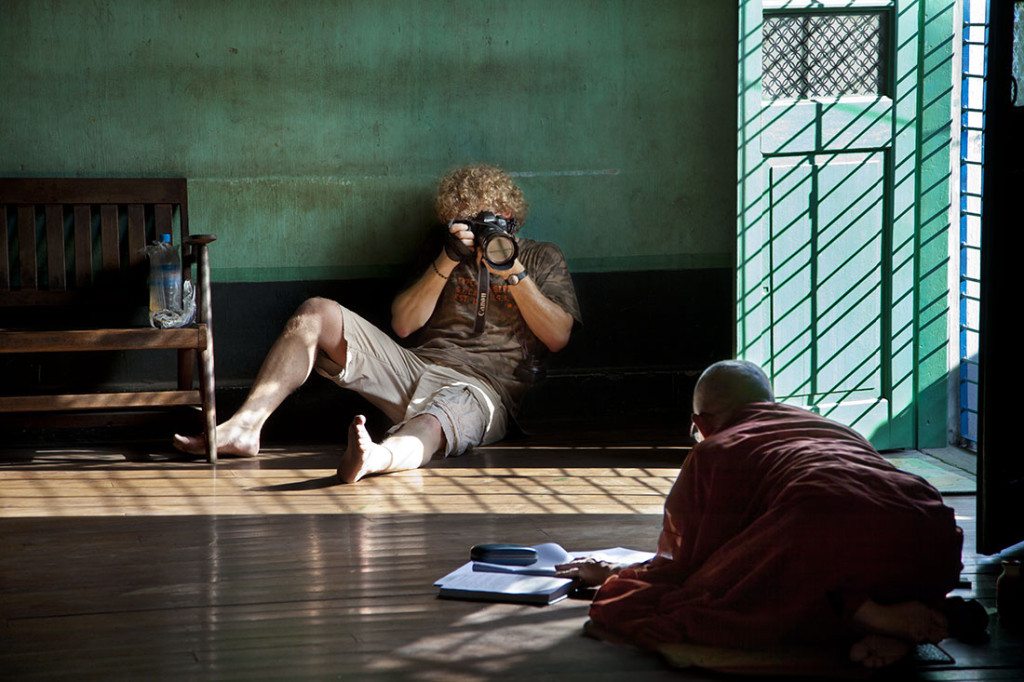 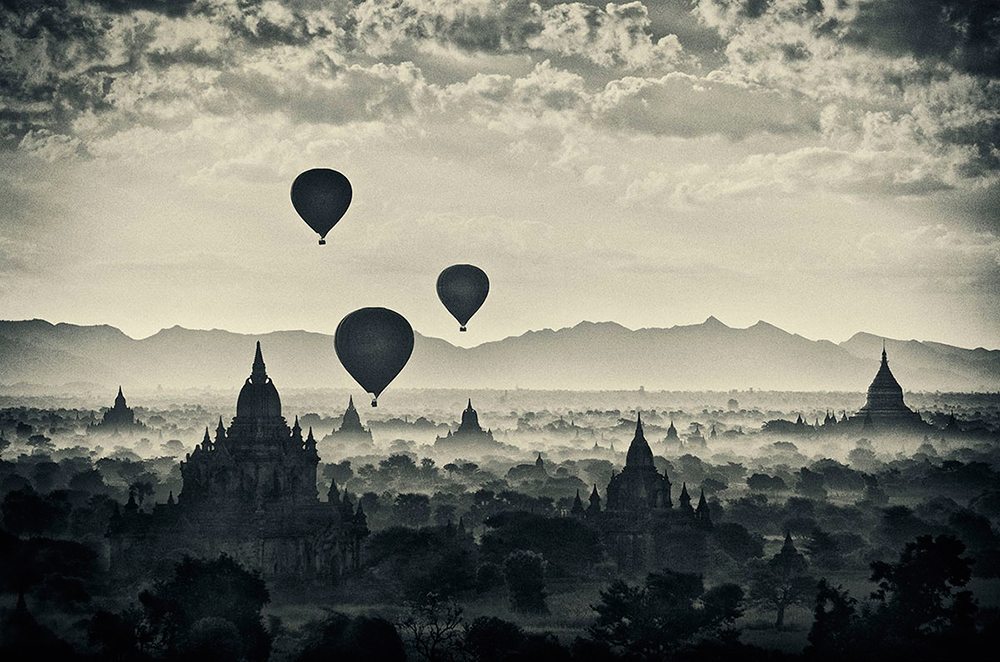 Do you have a favorite anecdote of any of your visits to Burma?

So many great memories and great stories, but I do remember one day leaving my workshop group at a monastery
and Holly and I went to find someone who could print out images for my favorite Monkmaster. They were very special images of a portrait set up I did of all of his little monks and a group of visiting nuns that he gave permission to stay at his monastery one night.

I was on a mission to get this image printed to give to every single monk and nun and while we were on the side of the road, working with this young guy and his little photo printing shack, Holly and I heard everybody screaming and running towards the water. We thought someone had a gun and was shooting at everyone and it was pretty scary as it was pandemonium outside on the streets. We then realized everybody was jumping in the water and trying to get to this boat that was in the middle of the river. It was total chaos and we had no idea what was going on.

My guide explained to me what was happening: a former monk master who had left all of it behind to be a normal person had decided to come back to be a monk master. He now wanted to give away all of his possessions and his money and he climbed into a boat with another person and paddled to the middle of the lake next to us and he stood up and threw his money into the air where it landed all over the place in the water. Every one was jumping into the water and swimming to the boat, trying to get is money, and was a scene I will never, ever forget.

What was so bad for me, is that when I decided to go out to get these pictures made for my monk master, I thought it would be a quick trip and I left all of my camera gear back at the monastery. I can’t even tell you how bad of a feeling it was knowing that I was missing this once-in-a-lifetime spectacle, because I did not have my camera. Holly and I just sat there in disbelief that I could have done this. But at least it’s still an amazing memory in my mind. I know now not to venture anywhere in Burma without camera. 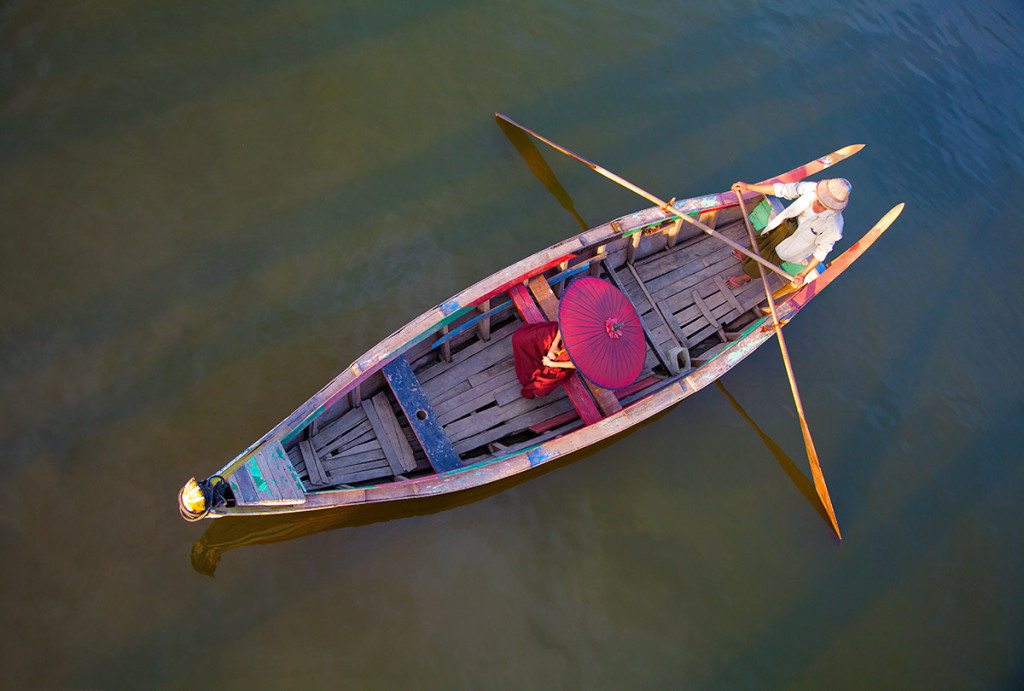 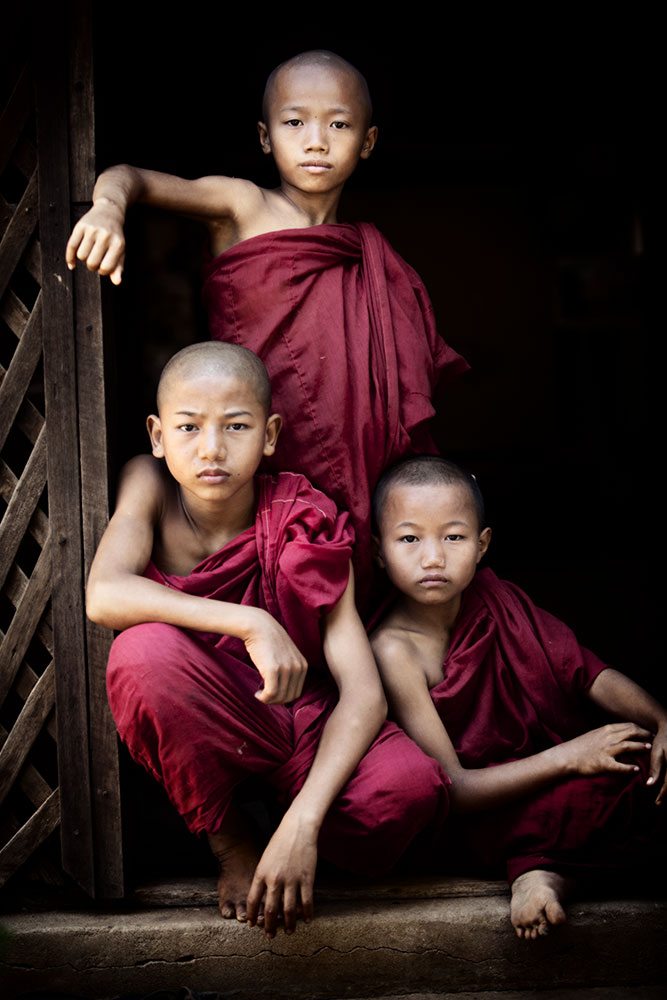 And last questions, what do you always travel with? We know the list will be long!

I guess I always have my Induro carbon fiber tripod, my Gura Gear backpack, my Apple laptop and extra hard drive, and of course all of my Canon camera gear. I use everything from a 15mm fisheye, to my 500 mm telephoto, and everything in between. I pretty much decide before each trip which lenses and what gear I will need and what stuff I will definitely not need. Too often, people bring way too much and end up wishing they had left stuff at home. After traveling to so many places you realize that less is more.

So many things are a must also including: a dust blower, ND and polarizing filters, cable releases, lightning triggers, diffusers and reflectors, flash gear and possibly small soft boxes, battery chargers and batteries, waterproof lens and camera covers, and a bunch more, a pretty long list actually! 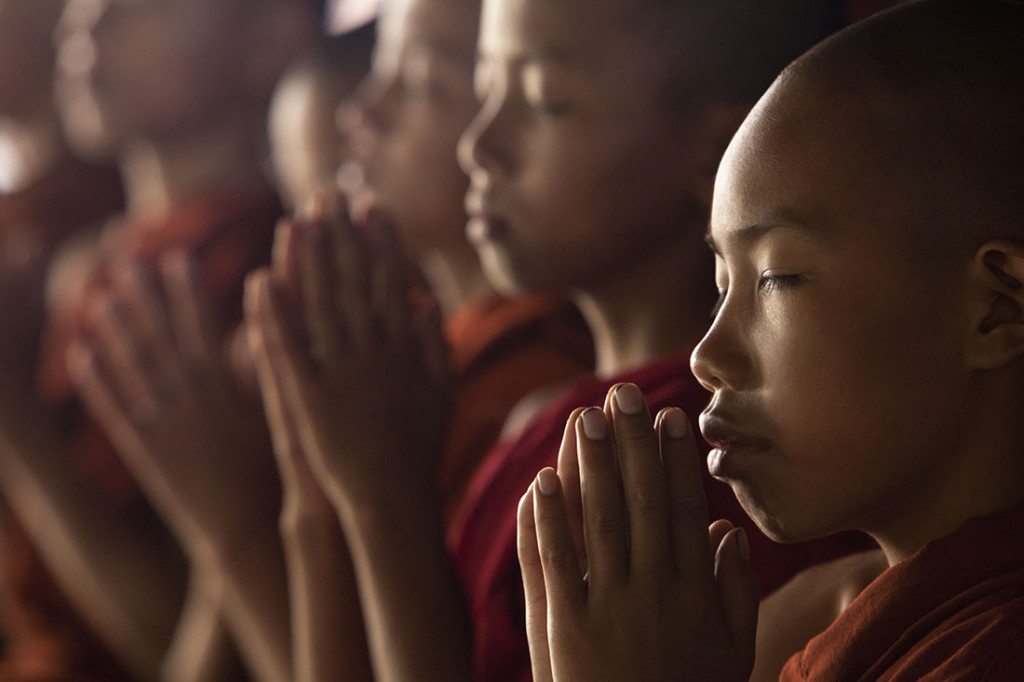 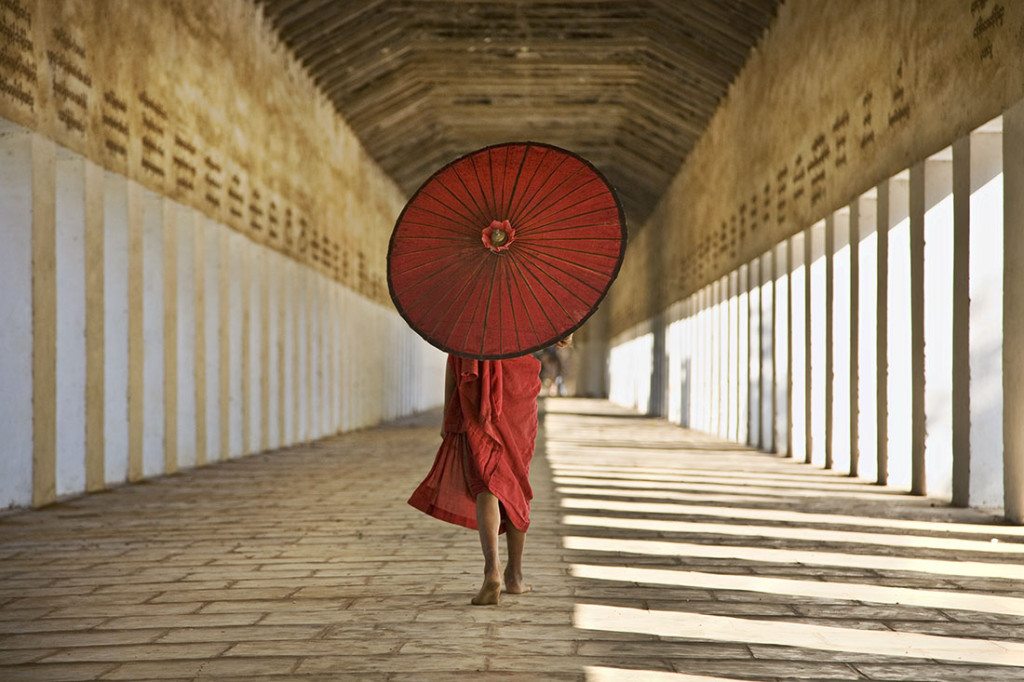 Thank you Scott for this interview! And to our readers, have you been to Burma [or Myanmar]? If you have a story to share, let us know!

Ps: all the photos are copyright of Scott Stulberg.