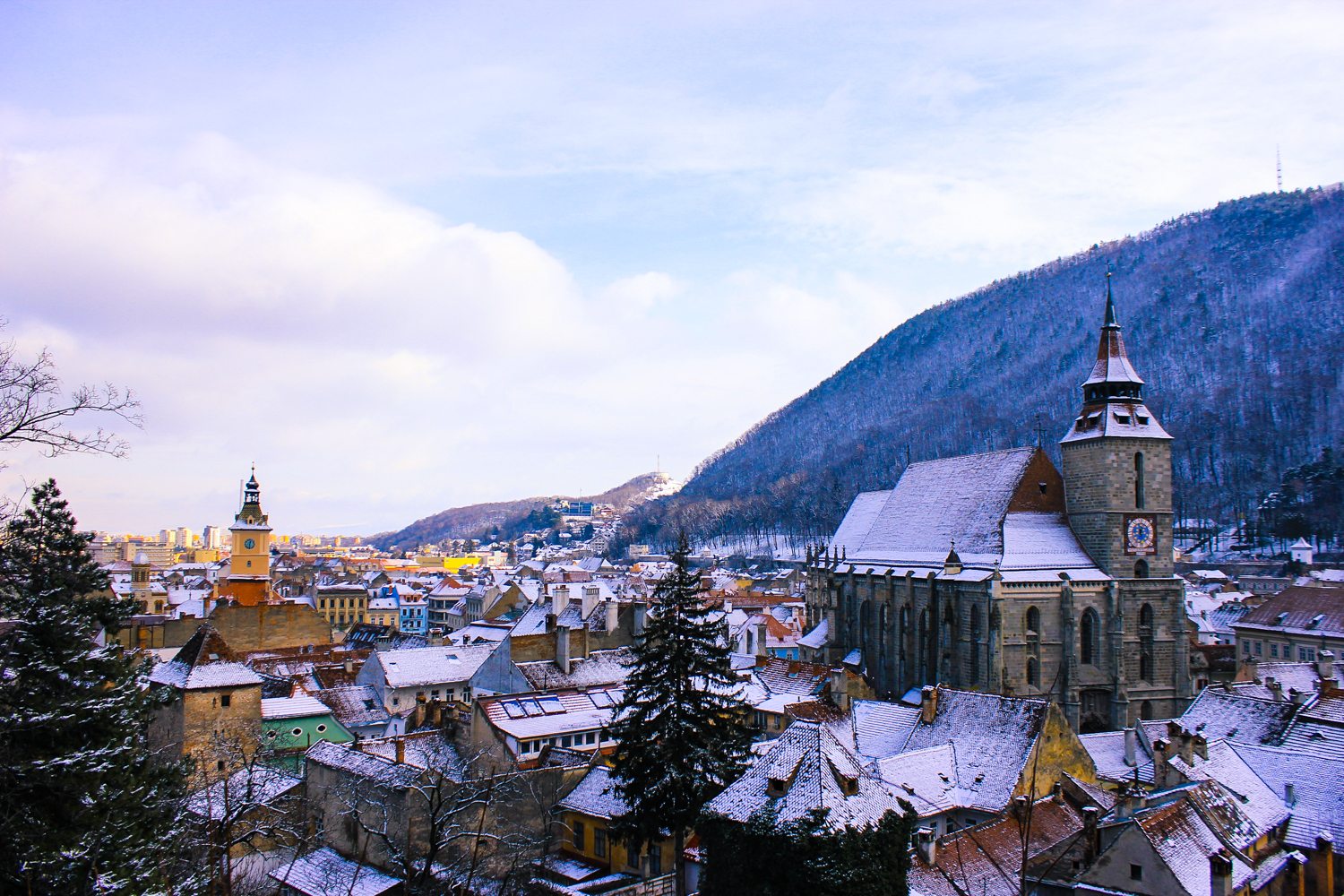 Lifting the Veil Off Transylvania

Crisp. February mornings in Bucharest are downright crisp. After a couple of days in Bucharest, my wife and I were ready to get out of the city. We wandered through the train station looking for our ride out of the city, only to find it at the last platform patiently waiting.

The train left on time. They were always on time, and we settled into our seats and the journey ahead. Looking out the window, I saw the city center melt away as we pushed deeper into the suburbs and outer districts of Bucharest. The grey of the city and remnants of communism gave way to small farms, then agricultural fields. The Balkans, along with most of Europe, just experienced one of the warmest winters on record, as was evident by the stalks that were already pushing up through the ground. In the distance, mountains were peeking through the clouds.

It was early. Too early and exhaustion soon took hold. When next I opened my eyes I was surprised to see that we were surrounded by so much green. Gone were the flat lands and cropped fields. While enjoying our nap, our train must have made its way into the mountains. Pine and evergreens sprinkled with fluffy white snow, not the grey slush we encountered in the city, were beside us. So close were the branches to the train that had we opened the window there was little doubt that we could reach out and grab a branch. The mountainsides rose on both sides and our hearts soared as our eyes made their way up to the snow-capped peaks of the earthen giants.

As we wound our way through the valleys we pass small settlements and the odd sheep farm. A couple more hours and the valley widened and small towns started to crop up; Campina, Sinaia, Busteni, Predeal. Based on the signs and advertisements, these towns have taken advantage of the country they are situated in and have made a living as ski towns. 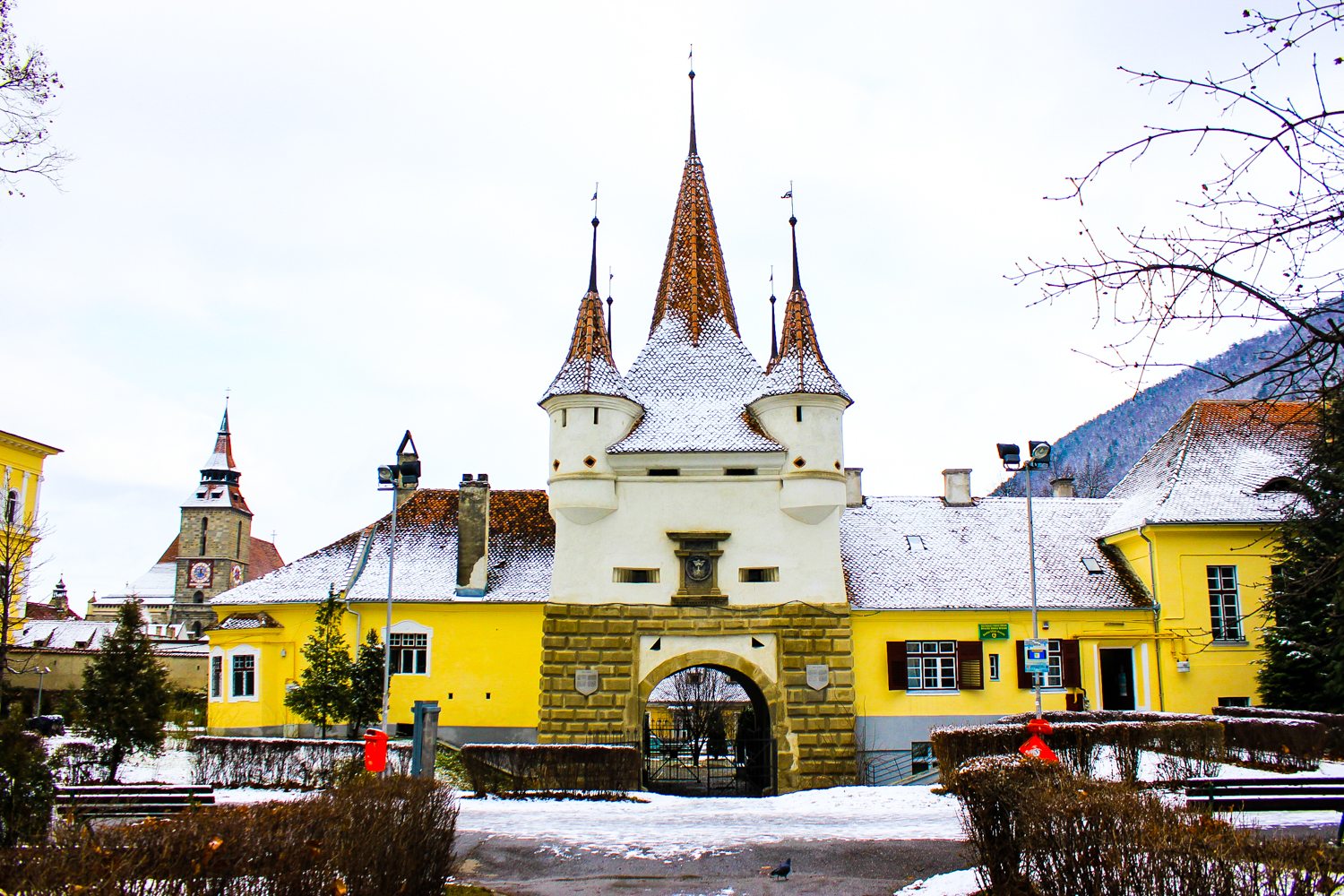 Two hours later we pull into Brasov station. Near the geographical center of the country, it serves as an important transportation and trade hub for the country. Its importance echoes through the ages as it served the same purpose for the Germans, Saxons and Ottoman Empire. During the Communist era, the city was renamed Orasu Stalin (Stalin City) to mark its strategic and cultural importance. The birthplace of the Romanian national anthem, Brasov has become the home base for those looking to explore, discover and enjoy the beauty of Transylvania.

But first, some covrige. What can only be described as a pretzel without the twist in the middle, this pastry comes in various forms. Covered in sesame seeds, molten with cheese, and plain are standard fare, but I seek out the version which has been piped with various fillings which include vanilla, chocolate and berry jam. For the cost of less than a cup of coffee in North America, covrige can be enjoyed multiple times a day. And we did just that.

It is difficult to ignore Tampa, a small 900-meter mountain, that casts its shadow over Brasov’s old town during sunset. Stunning views of the Brasov can be had at the summit that can hiked on foot or via cable car. The Black Church looms near the center of the old town. Proclaimed by some as the largest gothic-style church in southeastern Europe, its somber presence is in stark contrast to Catherine’s Gate. Standing since medieval times, it was the original gate into the city and with the bright, round conical roofs atop its turrets, and looks to have been plucked right out of the pages of a fairytale.

Thanks to Bram Stoker, the town of Bran and Transylvania, by association, has been synonymous with Dracula. Interestingly enough, the Irish author who penned the 1897 classic never visited Transylvania. He never even visited Romania. Bram Stoker found an illustration of Castle Bran, the iconic home of Count Dracula while doing some research for his book in a library. While Dracula never existed, Castle Bran still stands to this day. The original wooden castle was first built by the Teutonic knights in 1212 and was destroyed by the Mongol horde in 1242. The castle has since been rebuilt on the same rocky outcrop atop a small hill. In 1920, the castle was handed over to the Kingdom of Romania and became the favorite residence of Queen Marie. Today, Castle Bran is one of the most visited museums in the entire country. 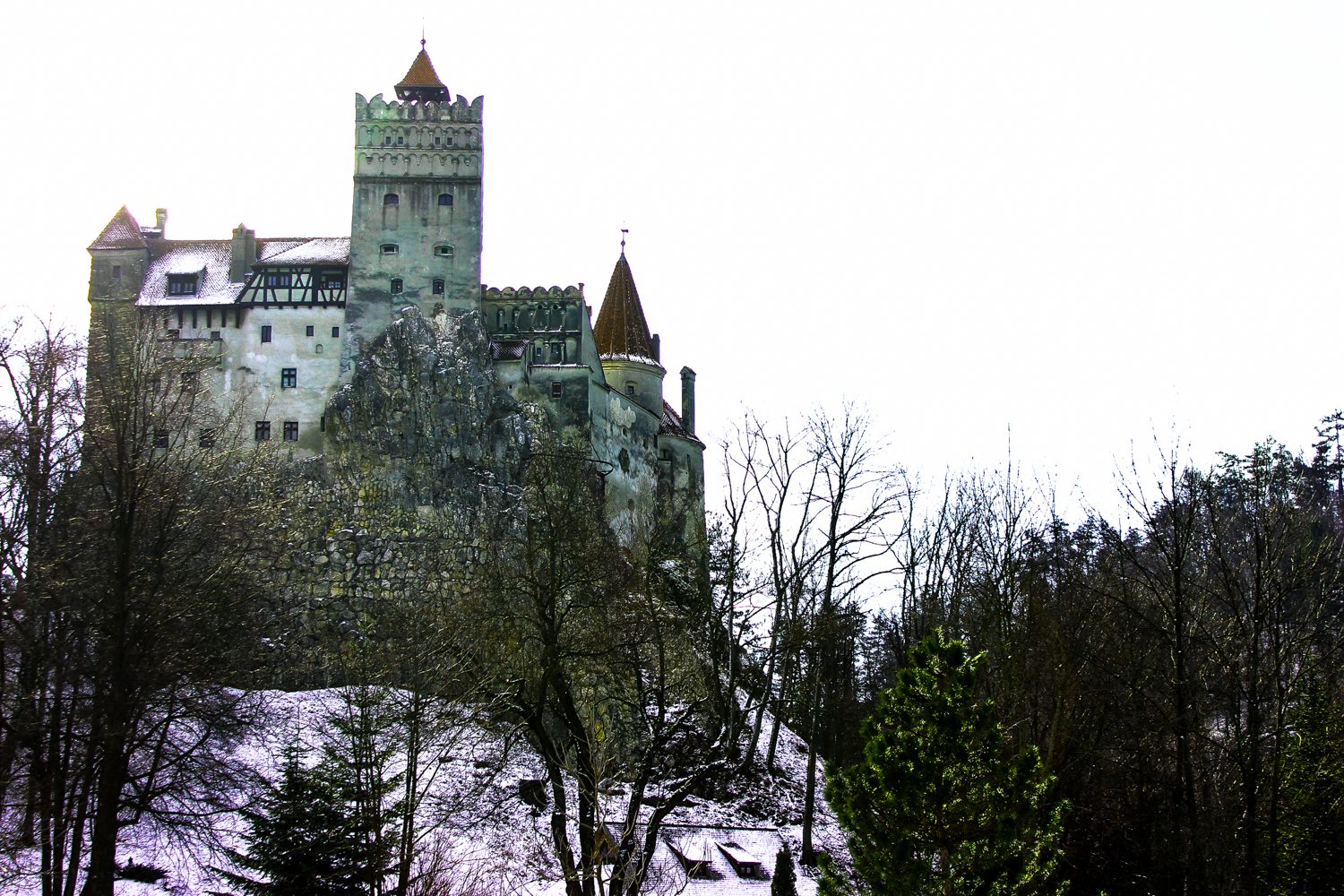 Sitting at the foot of the Bucegi Mountains, the posh town of Sinaia has been synonymous with skiing the Carpathians and the country’s most spectacular castle. Taking the train from Brasov we reached Sinaia in just under an hour. Several flights of stairs and a short walk from the station will lead us into the town center where hotels, amenities, and even a casino can be found. For powder chasers, the gondola to the summit is not too far. Sinaia offers some of the best and highest skiing and snowboarding in the entire country. Its proximity from Brasov and Bucharest make it the ideal weekend ski getaway for tourists and Romanians alike.

Taking the uphill street north of the town center led us past the Sinaia Monastery after which the town was named after. The pioneer monks and friars inspired by the mountain which towered over them named their monastery after the biblical mountain Sinai. Around the corner, a park entrance led to a wooded trail that quickly steered us to the direction to as structure that looks as if it was more at home in a Disney movie than in a Romanian mountainside. 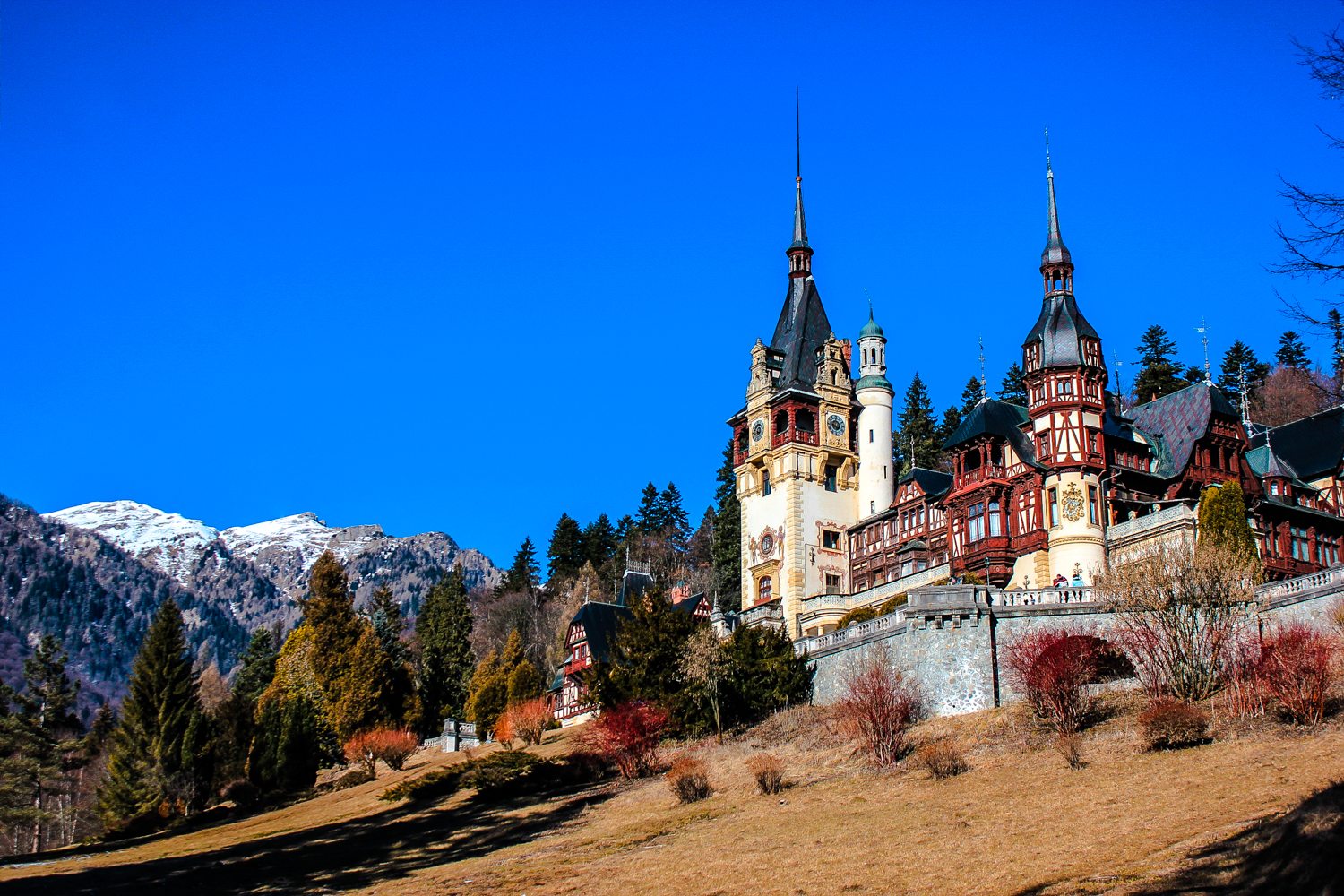 Johannes Schultz, a German architect, combined Italian elegance with German aesthetics into what would be known as a neo-renaissance style. With over 170 rooms in a 34,000 square foot floor plan, Peles Castle isn’t exactly the model of conservatism or restraint. It was built for royalty, and the ticket costs to enter this magnificent structure reflects this. Tickets prices are considered steep when compared with everything else in the country, although it does include a guided tour. Taking photos and film is prohibited without a permit, which can be also be purchased. We balk at the price tag and instead enjoy the grounds and gardens surrounding the garden which are free. Backdropped by the mighty Carpathians, Peles Castle took our breath away from all directions.

145 kilometers east of Brasov lies the small town of Sibiu. Unlike its other Transylvanian neighbors it is not surrounded by towering mountains. With the Cibin river cutting through the heart of the city, Sibiu was and remains to be an important cultural center. The town has a distinctly Western European flavor. Its main square is reminiscent to ones in Germany, Austria and Hungary, and is likely due to the fact that the town was home to German merchants and craftsmen in days long past. After Romania established itself as a kingdom many of the German immigrants headed back west but they left behind a very German looking town. It was the gateway to Western Europe. So much trade and commerce were being done in Sibiu that it was home to the first bank of Romania. Sibiu has maintained a thriving economy through the ages. These days many speculate that its continued prosperity is due to its most popular citizen, Klaus Johannis the President of Romania. 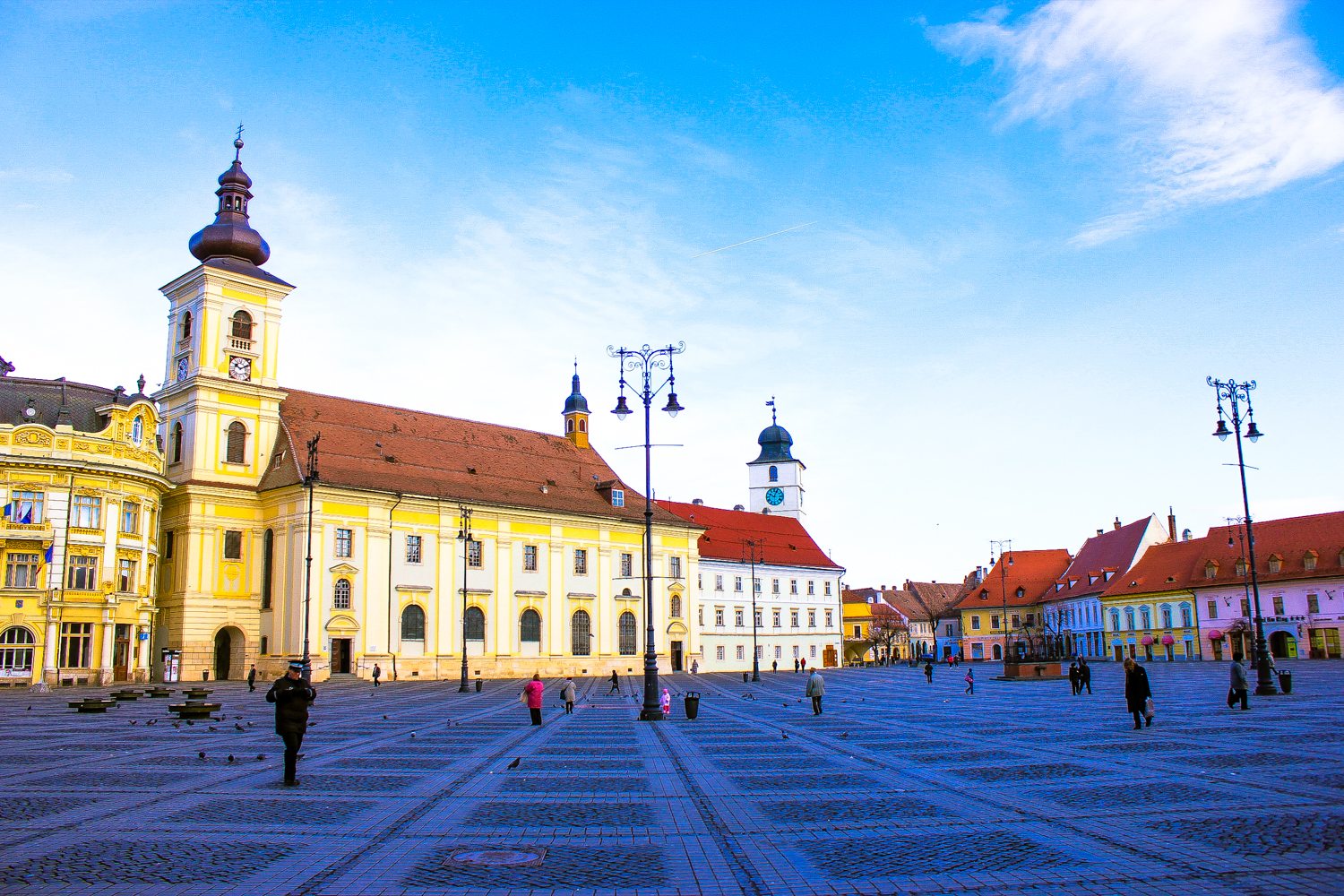 For years, Bram Stoker and the legend of a blood drinking Count cast a pall over Transylvania, but thanks to adventurers, backpackers, and travelers, the veil over this rich and vibrant region is being lifted. Each passing year exposes more and more people to its great food, awesome landscape, history, and culture. Truth be told, I went into those mountains with no expectations, not a single one. I was pleasantly surprised at every turn, every step up a mountain, every bite of covrige, every greeting from a local and every step I took. But maybe, that’s the secret to Transylvania, its true self can never be revealed in the pages of a book.