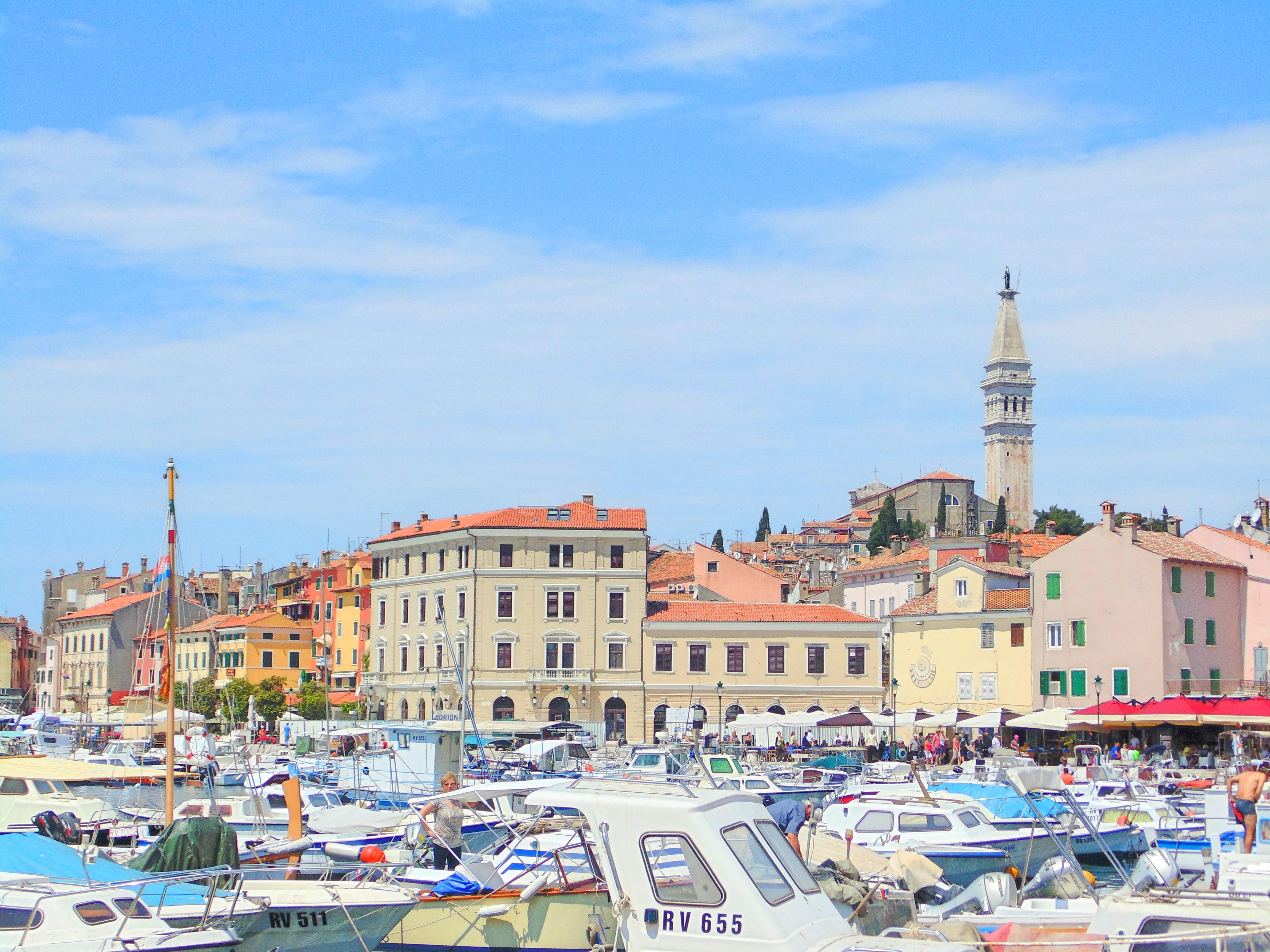 Croatia: The Hidden Beauty of the Coast

The Istrian coast is one of the most beautiful places I’ve ever seen. With Croatia’s uncertain history, it seems almost impossible that the country could harbour something so stunning. Rovinj, Poreć and Pula define the coastline and share a rich history.

We stepped off the boat onto the Rovinj dock and cast our eyes towards the old town on the water. The pastel pinks and yellows of the buildings stand in stark contrast to the bright blue water. We walked down narrow cobbled streets with washing strung out above us and window shutters thrown wide open in the early afternoon heat. In the town, the streets are wider but cluttered with tiny shops and merchandise for sale. Traditional Venetian masks, hand-carved candles and local artwork are a few of the many wonders.

In the centre of the town stands the clock tower, an old Venetian monument, preserved over time. Tourists cluster outside its doors as a tour guide gives a detailed history, speaking into his microphone so everyone can hear. We stop for a moment and listen. ‘Underneath the tower was a prison for minor offenders…’, his accent is thick but his words are clear and the tourists seem enchanted by them.

Just round the corner is Balbi Arch, another relic from ancient times and one that looks ready to crumble. It’s the former gate of the old fish market, a sign that Rovinj was once under the Venetian rule.

Through more medieval streets, cluttered with vendors, is the steep climb to the church of St Euphemia, a Baroque building and the pride and joy of Rovinj. It is an important monument that defines the Rovinj skyline and builds the characteristics of this charming fishing town. With unhindered views of the sea and the distance islets, the church keeps a watchful eye on the coast. 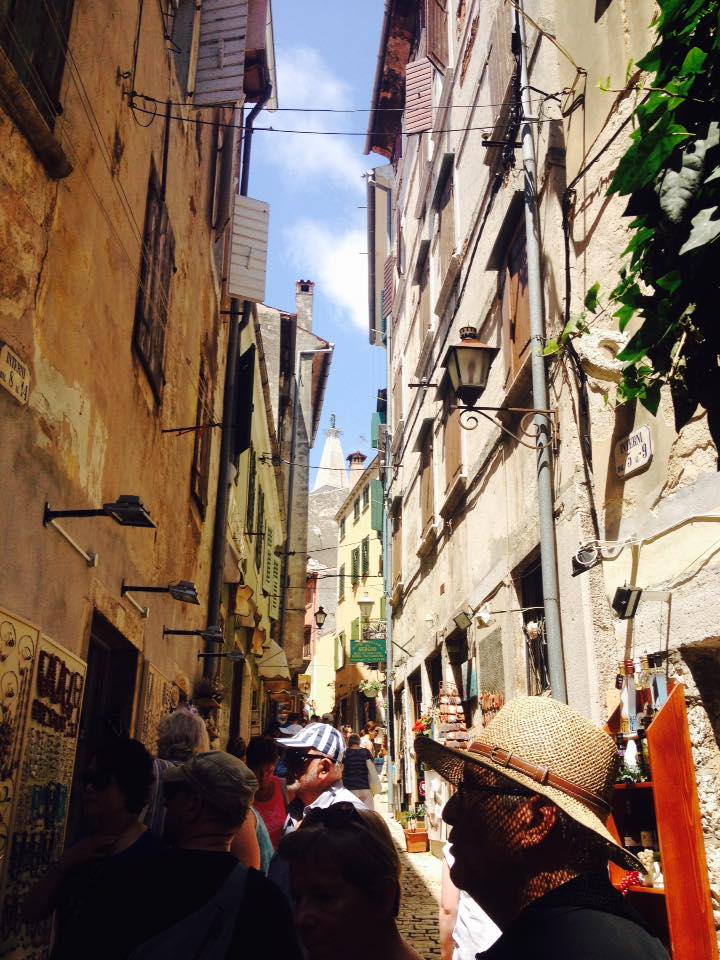 Back on board Astral, Rovinj slips away and becomes just a speck on the horizon. Seagulls flock around the boat and smaller, quicker vessels speed past us on the open water. There is a sense of freedom as the wind whips through my hair. I lean over the side of the boat and look into the clear blue water. The smell of sea salt hangs heavy in the humid air. There is a trail of white froth, like the train of a wedding dress following us through the water.

This time we cycle and explore the wild countryside of Croatia. The side of the road is dotted here and there with vineyards. The ground is rough and uneven in places where it has cracked in the heat, but the roads are good enough to cycle on and it doesn’t take long before we arrive at the very heart of this boating town. Locking the bikes, we make our way along the marina and see row upon row of magnificent, and expensive, yachts.

There are people lying out and sunbathing on the front of the boats, and others cooking up food. A man slowly paddleboards past at a leisurely speed and is overtaken by the police, speeding out of the harbour. Looking out across the water is the island of Saint Nicholas, home to the Valamar Isabella Hotel and neighbour to the Isabella Castle. Once a summer retreat for the Italian Polensini family, the castle stands proudly on its 19th-century foundations. The island is alive with activity as people come and go, clambering aboard little boats and making their way to shore.

A volleyball stadium has been erected near the little market in the centre of the town and the loud music can be heard even from here. We walk down a boulevard, in the shade of the trees as we notice museum after museum representing the radical changes of the city from Roman to Italian rule. 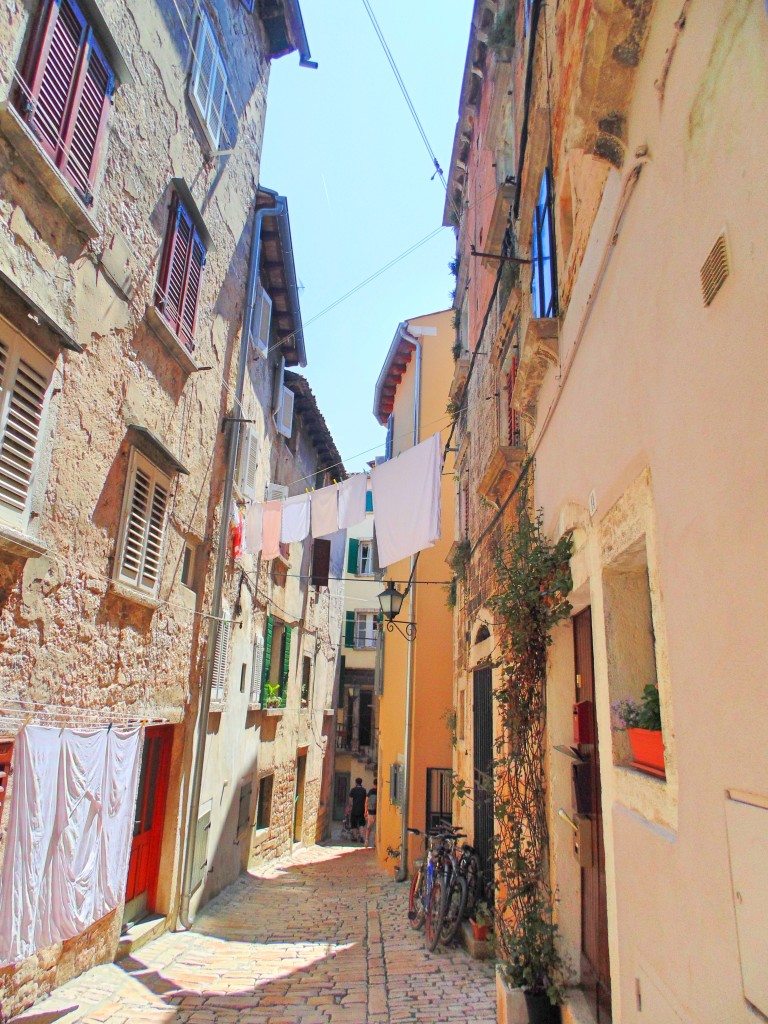 An old tower, part of the original walls, has been converted to a café.  Here, the cobbled streets are more open but gradually narrow as we reach the Euphrasian Basilica in the centre of the town.  The overbearing Gothic presence of this giant tells of a long history with the town.  There is a reverence in the streets around it and tourists flock to get a glimpse.

We slip away into one of the side streets, avoiding the commotion.  It has brought enough excitement for one day as we head back towards the bikes.

Croatia’s coastline has been defined by its history and Istria, in particular, is more than just a destination. It’s an adventure, a chance to travel back in time. A chance to see the old flower boxes hung underneath shuttered windows, to feel the peeling paint as it comes away from the old stone, to breathe the fresh sea breeze as you sit in a café. It gives you a feeling of peace, of a reconciliation that happened much later than it should have. Embrace Croatia’s culture, explore her heritage and enjoy what she has to offer.

Natasha is a German-born Brit with a love for the unusual and a thirst for culture. Natasha loves to explore in her writing and experiment with different styles. She is a book addict and a petrol head.