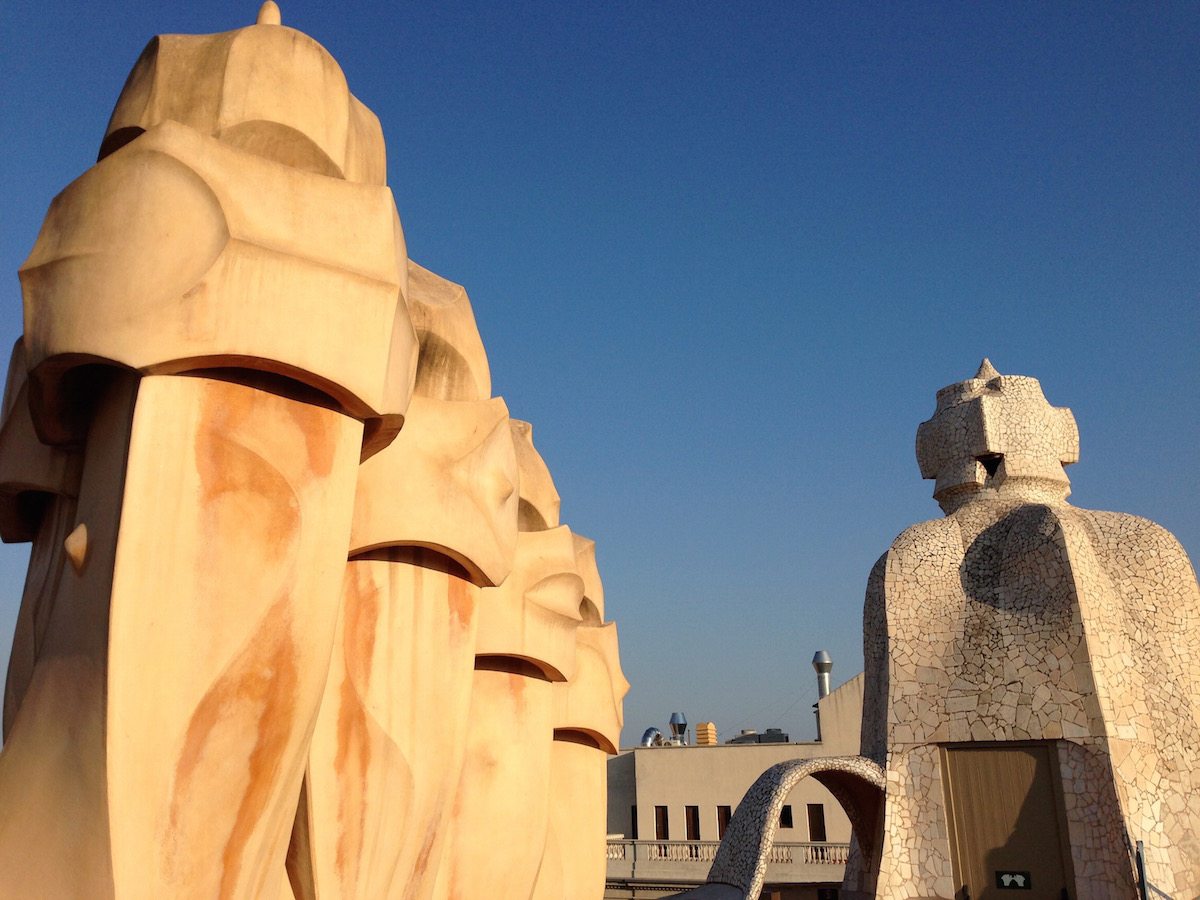 The house breathed, heaving slowly underneath me, a living entity. Or perhaps the undulating rooftop I stood upon aroused that sentiment. Twisting spires next to me, like the flared nostrils of a dragon, wheezed out ventilation. Casa Mila was not what I expected: fanciful for ornamentation’s sake. Instead, it was at once grotesque and beautiful with a sinuous synthesis of form and function that engulfed me. As a lover of classical architecture, I was not interested in pursuing the labors of Antoni Gaudí while in Barcelona, Spain. The Catalan architect’s craft was the antithesis to my preferred Greco-Roman styles. I recoiled from his impractical exuberance and lack of plane geometry. Rambling the city, however, the billowing never-ending curves of this facade arrested me. I wondered if I had missed the essence of Gaudí’s perspective when I first saw the systematic fluidity of Casa Mila. I was compelled to explore the motivation behind his fantastical creations. 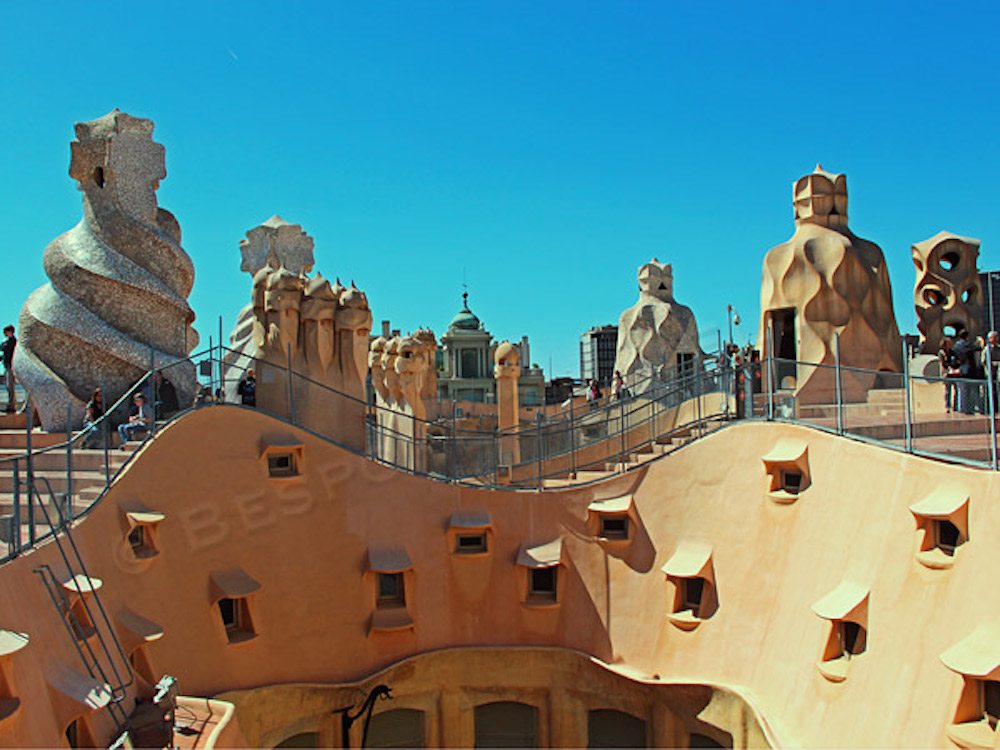 I leaned out over the flowing balustrade of the Casa Mila trying to make sense of what I had seen inside its walls. Built in the early twentieth century, the modernist structure rose up in defiance of any building type I had encountered. Gaudí’s handprint is instantly recognizable: his compositions look as if he transforms deformed monsters into human residences. Locals call it La Pedrera —The Quarry —but to me the edifice seemed wrought out of the bones of a sleeping beast: its interior an Escher cavernous maze, its crown an ecstatic compendium of chimneys, staircases, and skylights built out of broken marble and glass. Its anthropomorphic nature unnerved me until I climbed back downstairs into the heart of the creature. Then I grasped that the skeleton of an animal made for a structurally robust shelter while also furnishing an organic magnificence to the urban landscape. Although La Pedrera appeared initially flawed, it was impeccable in its harmony of adornment and substance. I pondered the florid vestibule murals at Casa Mila which revealed Gaudí’s passion for wildlife. The orotund vines hinted that the designer’s obsession with nature was integral to his vision, a secret understanding I wanted to uncover. 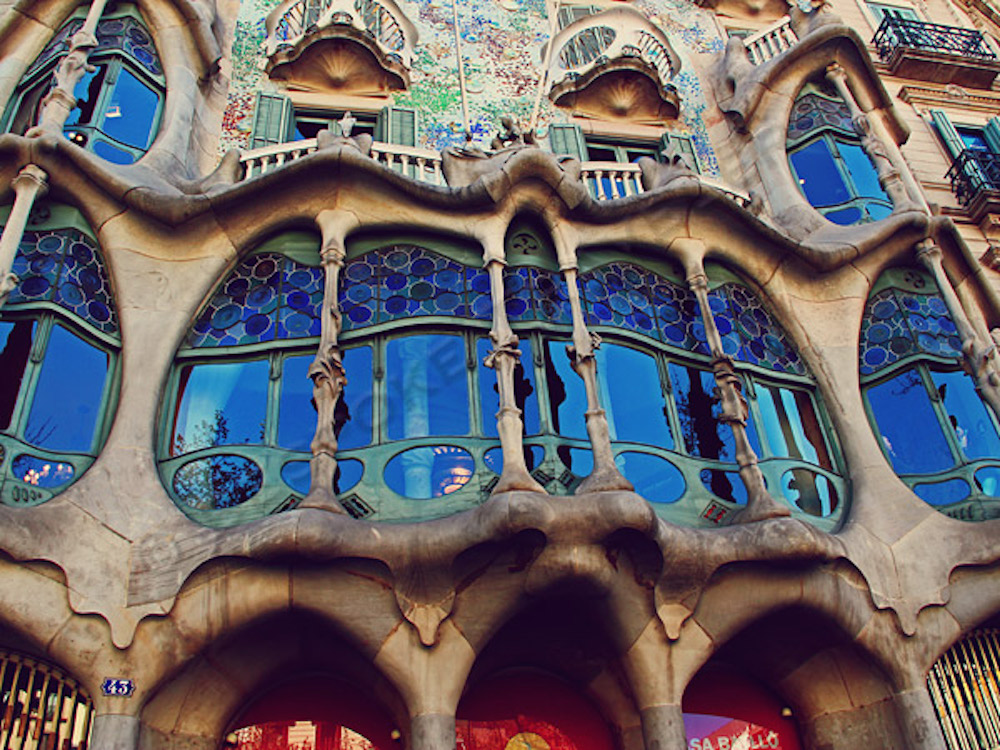 After studying the contortions of La Pedrera, I made my way to Park Güell in the Gràcia district of Barcelona. This rocky hill was transformed into a garden complex by the modernist creator in 1914. Here, what tantalized me most about Gaudí’s designs was obvious: staircases, walls, and railings vibrated with the animation of living beings. A salamander astride a balustrade is simple decoration, but in Antoni Gaudí’s control, the mysterious lizard transfigured into a mascot whose essence was repeated in every blue-green rippled terrace partition and sloping colonnaded pathway. From the gingerbread Caretaker’s house to the trencadís mosaic tiles, every inch of his layout weaves seamlessly into the natural garden. Structurally, his use of inverted catenary arches throughout Park Güell imbues the vigor of the elements while retaining a sense of flexibility. Seated upon the serpentine terrace bench I understood that in the heart of the fragmented geometry of nature, Gaudí observed a native strength man could never achieve through the classical approach. This was why he repeated the ripples of waves, the curves of wings, and the hexagonal resilience of honeycombs into his arrangements. Nature was the complex foundation on which Antoni Gaudí wished to build his art so that man could be ensconced within the ecosystem rather than live separated from it. At Park Güell, I began to admire Gaudí’s philosophy. I yearned to experience this ethos inside his masterpiece, La Sagrada Familia, which he devoted forty-three years to planning. 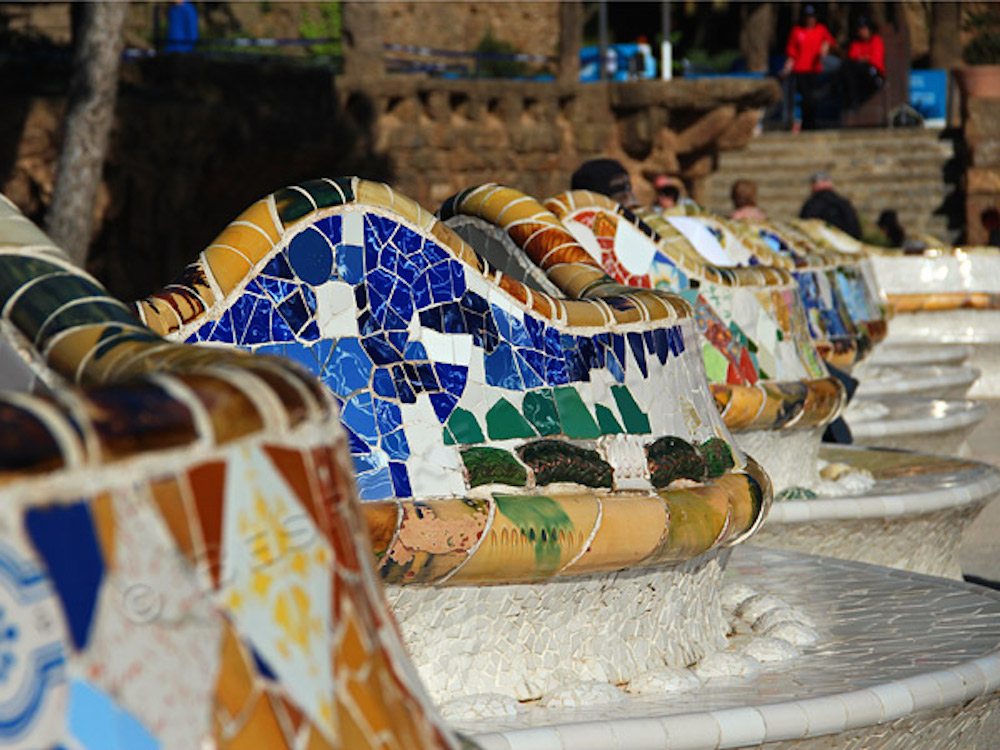 There is no other handiwork that exemplifies the essence of Gaudí more than his unfinished cathedral. Though it is not the official church of Barcelona, it symbolizes everything the city represents. Entering the jowls of Sagrada Familia, I penetrated a colossal stone forest whose mammoth tree trunks stretched to the heavens ending in golden light bursts. I was in a woodland seclusive, spacious, and replete with light. The arboreal columns lining either side of my path evolved above me into helicoidal branches intersecting the ceiling in an imitation of palm leaves giving the space both a spiritual weightlessness and structural durability. Perforations throughout the columns and at every level of the church admitted natural and artificial light to filter down. The apertures unfurled upwards reminding me of looking at the sun through the laced web of moth-eaten leaves. The geometry of nature symbolized spirituality here transporting me to a sphere where I was both awed and comforted. Everything at Sagrada Familia was meticulously planned so that the aesthetics of nature transcended into religion while providing a structural foundation. There are no right angles, no perfect circles, no obvious order to the construction of the cathedral. Instead, the basilica organically grows out of the wilderness, an antipode to the natural order of the world. 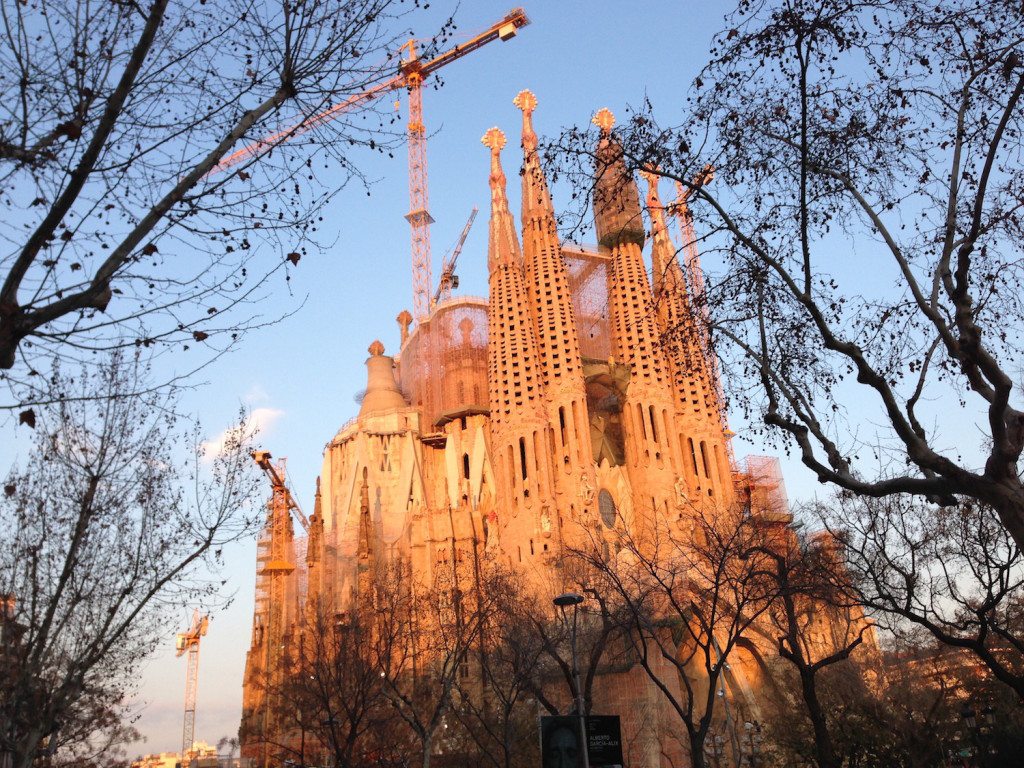 Enveloped in Gaudí’s magnum opus I grasped why he had chosen to inculcate the geometry of nature into his ethos. In its imperfections he discerned beauty. In its flaws he recognized integrity. Standing underneath the tonal stained glass it registered with me that imperfection was the triumph of life. The cracks give meaning to us and our work. I strive for the utopian, but revelation does not come through idealism, it seeps into us through our failures, our blemishes, our limitations. The warps in our character define us as individuals, they signify our particular path. I would like to think that Antoni Gaudí has converted me from an idealist into one who happily trades in the completeness of the incomplete, but I know this is not true. I still long for a faultless life, strive for flawlessness in my profession, hope for an impeccable travel experience. Through his masterful imperfections in Barcelona, however, I can slowly embrace my true self, the one I catch in the mirror sometimes not wearing its mask of invincibility. Author Bio:
Atreyee Gupta is a travel writer who specializes in examining the transformative power of travel through creative storytelling. She focuses on combining the worlds of science, travel, history, and philosophy in her writing. On her website, www.bespoketraveler.com, Atreyee explores how travel shapes our world and ourselves, how it affects our perceptions, and how it both creates and destroys new ways of thinking. Her articles have appeared in several publications including “Elephant Journal,” “Pink Pangea,” and “Rebelle Society.” She is currently working on a book.