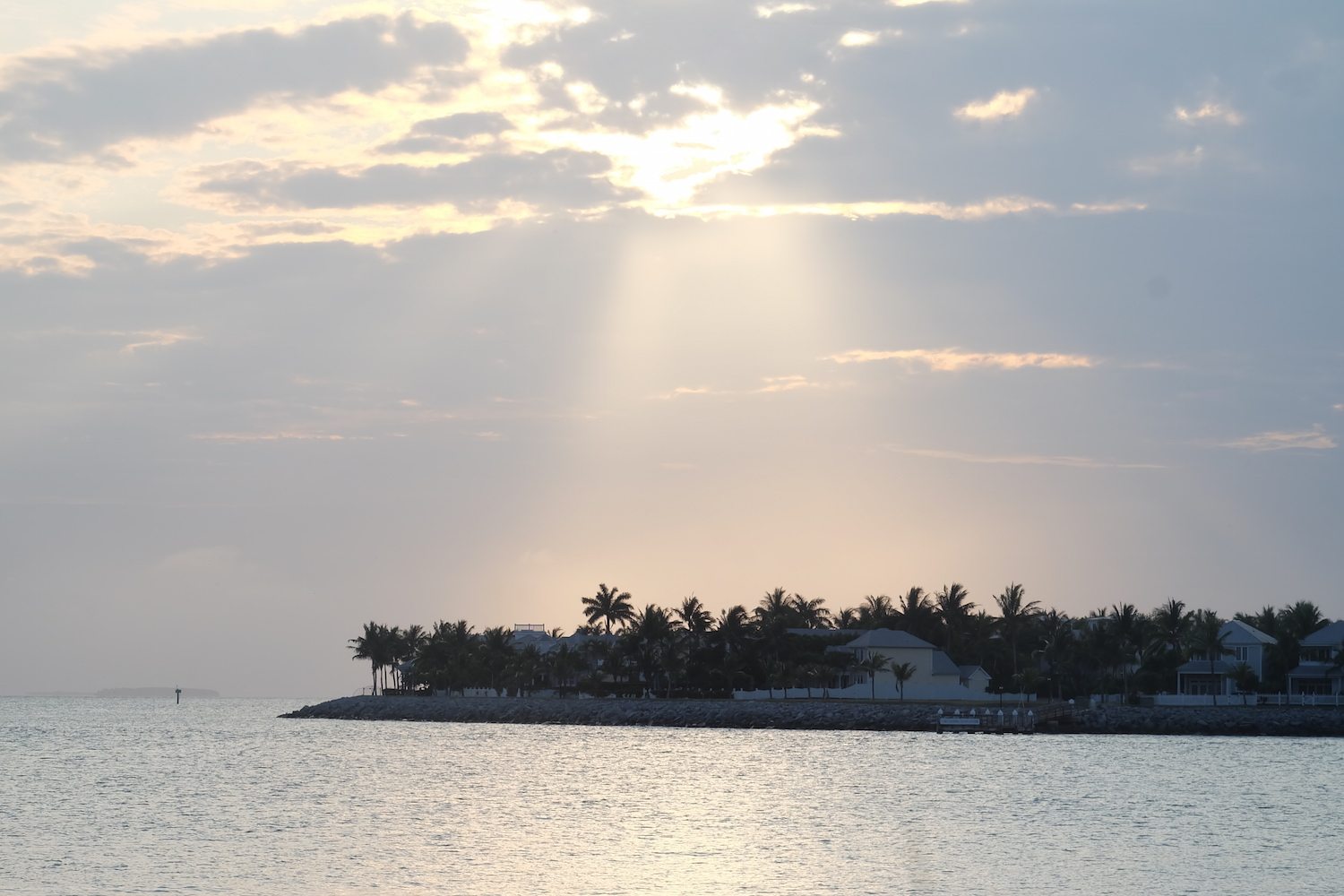 The Literary Suburbs of Key West

When my other half suggested visiting Key West on our Florida holiday, I wasn’t all that excited. I mean, I hadn’t really heard of the place (I must have been living under a rock) and didn’t know what was there. Only when I was told it had the Southernmost Point of Mainland US did it ring some bells, but I wasn’t that amazed.

Until I discovered the literary goodness of the island. If you’re a book lover, I’d say this one of the most amazing places you can visit. Key West just oozes literary love affairs, starting with Hemingway. His house is in a prime location. The man had taste. It’s massive. And fairly cheap to get into as well, a measly $13 entry and this includes an optional tour from one of the Hemmingway house experts. 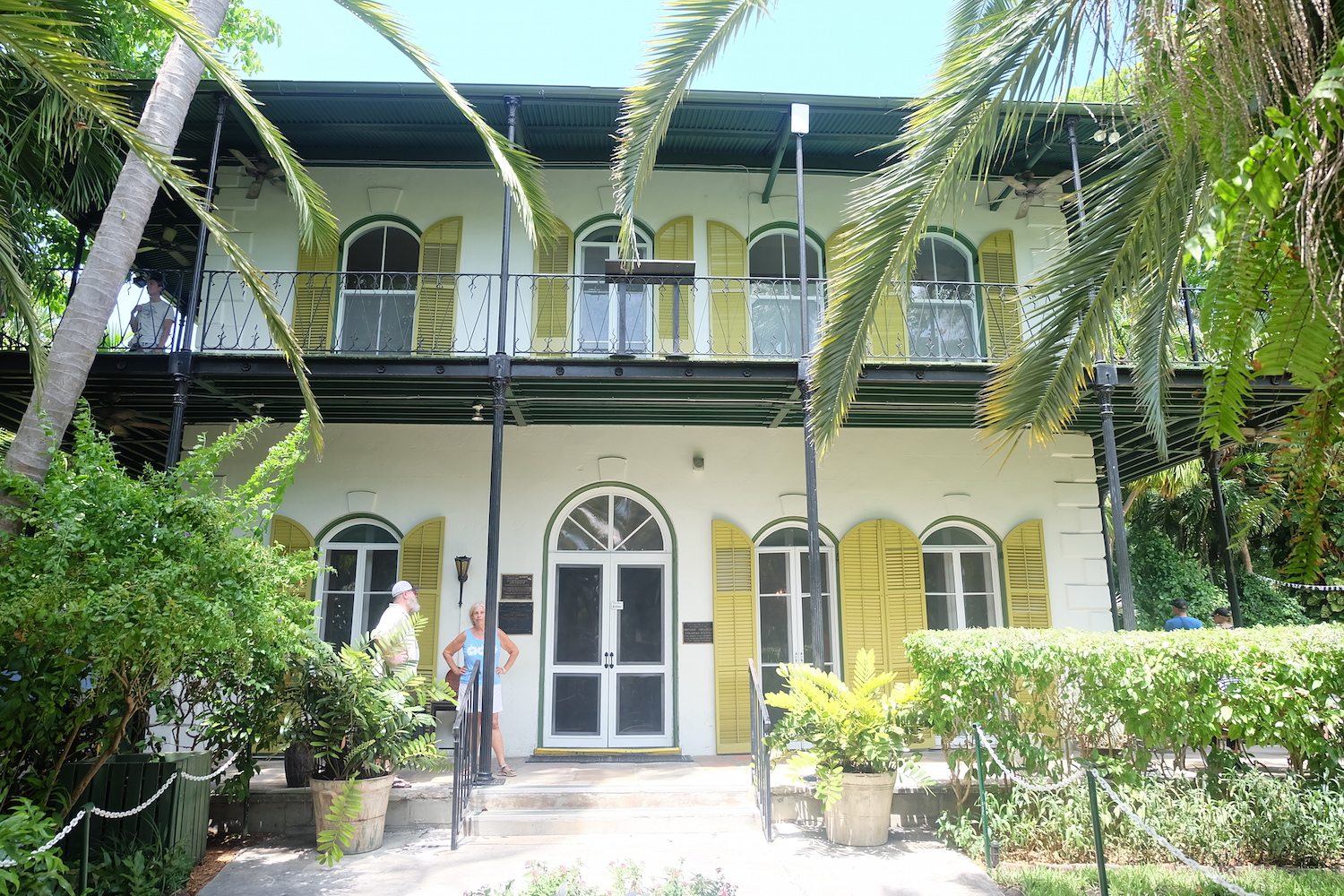 We walked into what was a blissfully cool building and were treated to the delights of posters, information placard and tidbits about his life. There are tokens, quotes, and antique items everywhere, as well as hundreds of cats. Okay, I’ve exaggerated slightly but there was at least twenty or more. The first one was asleep on the mantelpiece in one of the ‘information rooms’. The second was curled up on the bed. 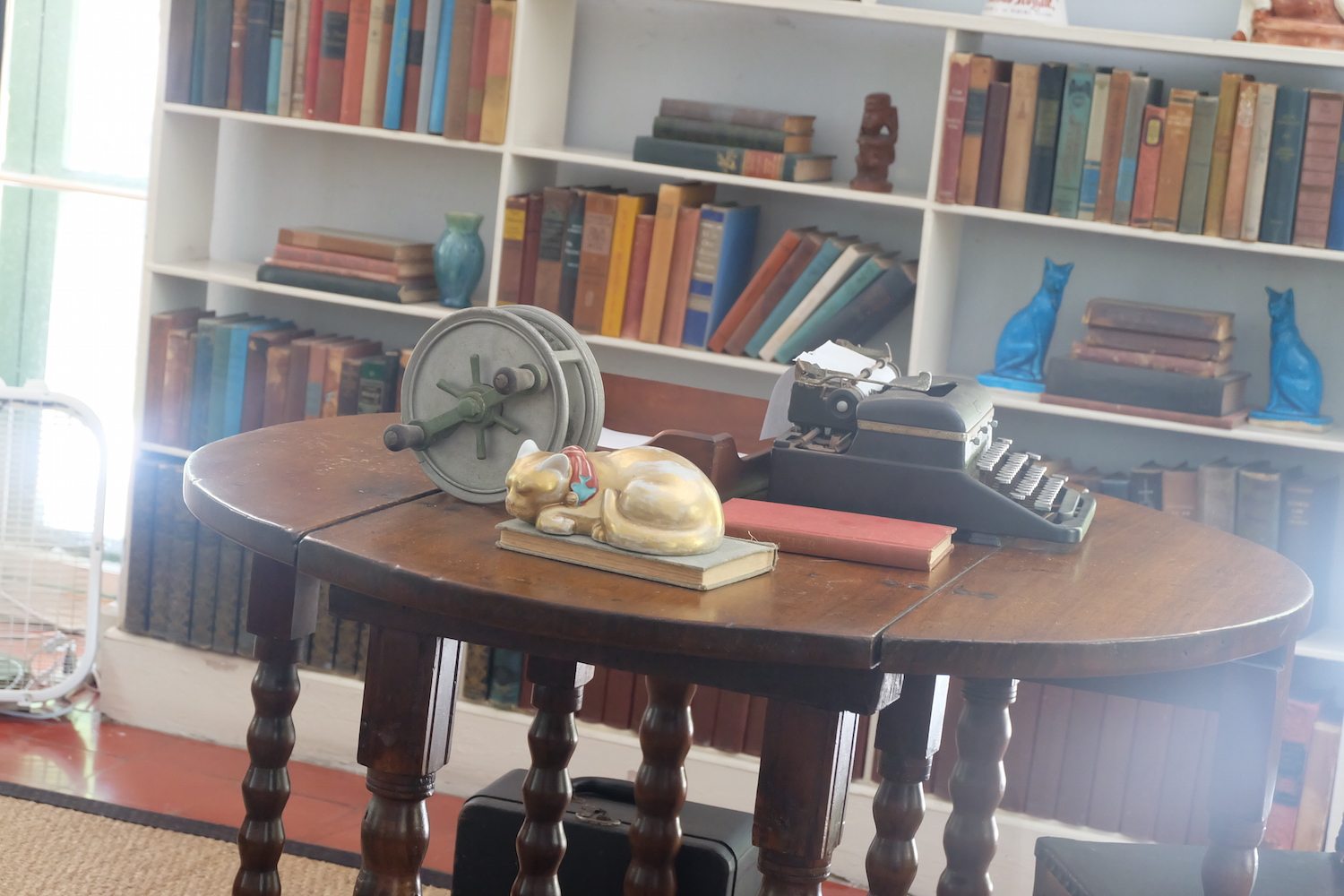 After walking through the rooms and absorbing information about Hemingway’s life, we walked out onto – what I can only describe as – a first-floor veranda. From here we had a marvelous view of the gardens, the flowers, the cats (yes more cats) and the pool. It didn’t take long for us to find ourselves amongst the tropical wildlife on the ground floor and lost in the maze of greenery. I won’t lie I was shocked to discover several more coats, so surprised that I couldn’t help but photograph them.

This complete circle finally brought us to Hemingway’s studio – the one place that I was dying to visit. And it was every bit of spectacular as I had imagined. A desk, a typewriter, a couple of chairs and a small bookcase. In fact, it was quite sparsely populated by items. I gazed through the iron bars that separated me from the rest of the room, I won’t go so far to say that my head was being squeezed through for a better look like a five-year-old child, but I did take a few good snaps.

We finished touring the house, the studio, the gardens and found ourselves in the delightful little bookshop – populated by yet another cat dozing on one of the shelves. (He was not for sale) And here I spent a great deal of time trying to decide on which book to purchase because I couldn’t possibly walk away without one. I ended up choosing To Have and To Have Not because something in the blurb mentioned Key West. I don’t know what the book about so do let me know if you’ve read it. 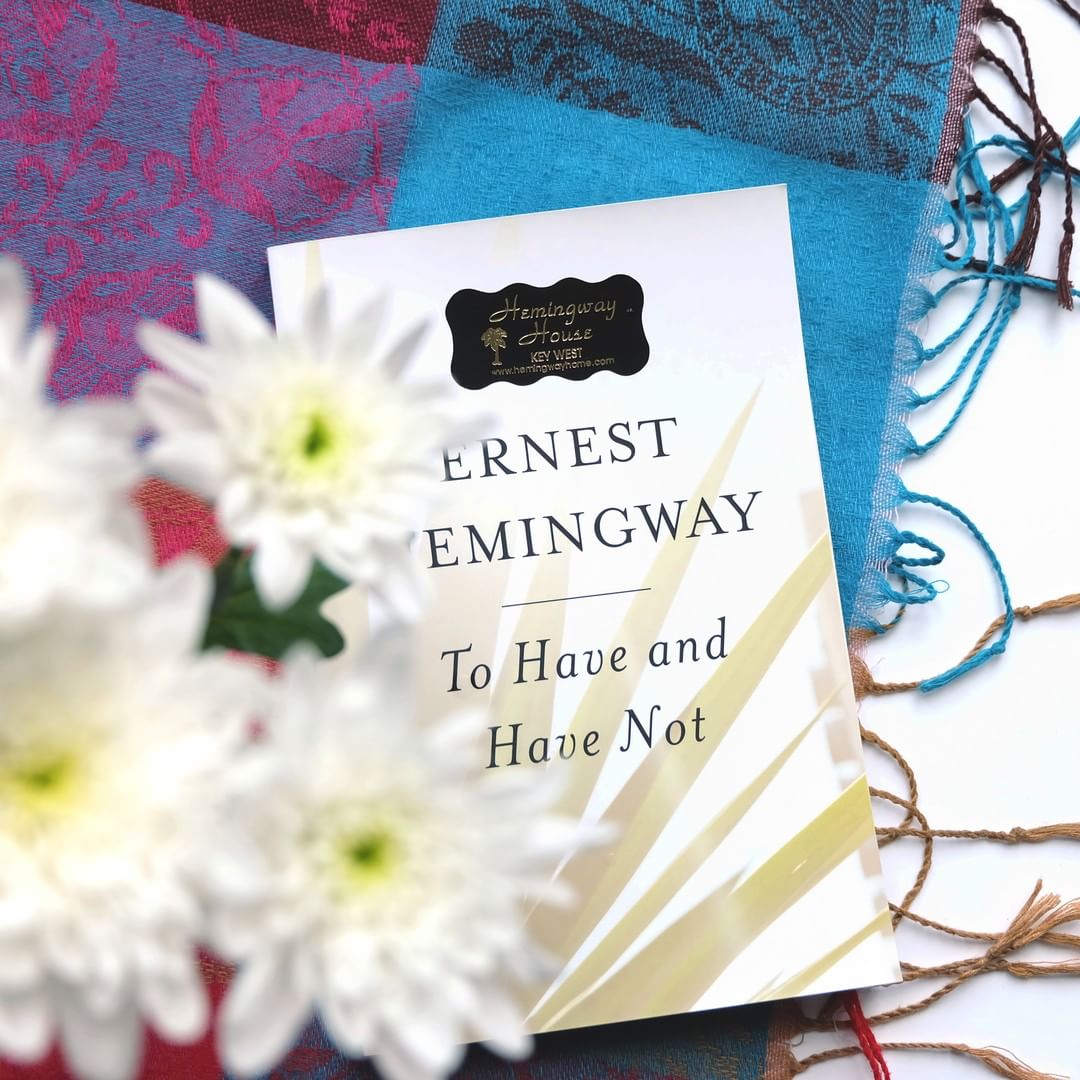 The literary side of Key West doesn’t stop at Hemingway’s house and I believe there are in excess of twenty other literary icons that graced Key West with their presence – or so one website claims. If you’re a Hemingway lover then it may be worth a trip to Sloppy Joe’s on Duval Street, a favorite haunt of his.

For those of you wanting to pay homage to Hemingway and other great literature gods, you may be thrilled to discover that Tennessee Williams and Robert Frost both spent time on the island and you can see their homes or who knows? Maybe you would prefer to take part in the Hemingway Days Celebration. The choice is yours.

For me, I had a very different mission. On a side street, not far from Duval Street is a little bookshop called Key West Island Bookstore. Going strong since 1973, I was keen to visit the little independent establishment and expand my collection for a second time that day.

From the outside, the store is a delightful and quaint little bookstore, from the inside, I’m disappointed to say it doesn’t look like anything special. I browsed the general fiction sections for a while, looked at a few crime books and realized that they weren’t really what I wanted. I could buy James Patterson in every bookstore in the world; buying one here wouldn’t make it overly special. So I plucked up what little courage I do have and approached the front desk.

The lady manning the shop was the loveliest I’d met all day. She was only too happy to help, giving me a detailed synopsis of each book she pulled off the shelf telling me which she liked better and why – and they were all local authors of course. I even met a local crime writer as he dropped a batch of his own books off!

I finally chose my book – Florida Straits by Laurence Shames – and the very nice lady even stamped and signed it for me, at my request. I left feeling giddy like a little girl! I don’t have to tell you that my boyfriend was almost horrified – yet not surprised – to learn that I’d spent $18 dollars on a new book. And the news that it was the first in a series really didn’t help matters. 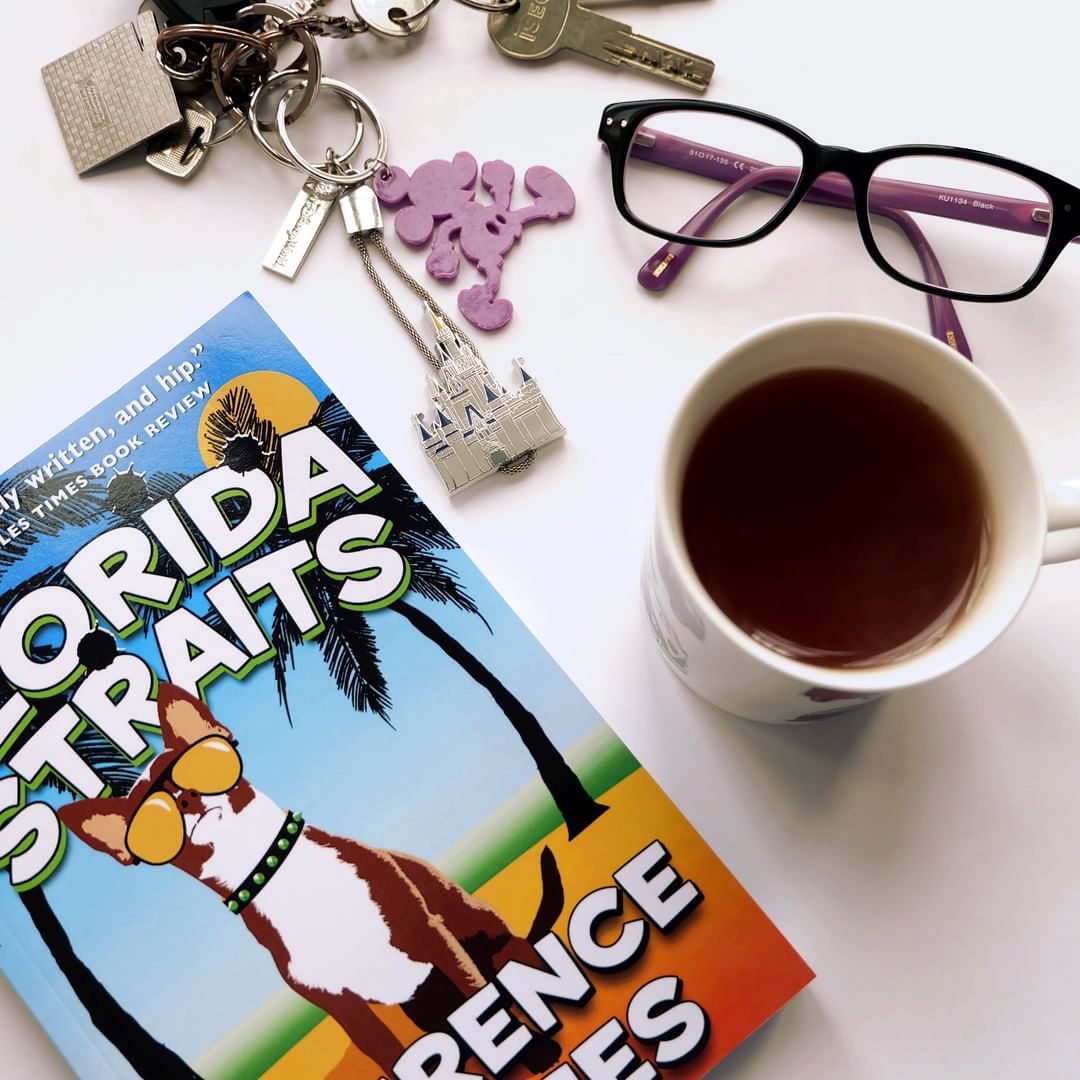 For me, Key West was the most wonderfully marvelous place I think I’ve ever visited. I’ve been to London more times than I can count and even toured the Sherlock Holmes pub, the British Library, and 221B Baker Street but nothing compared to my afternoon in the literary suburbs of Key West. And the best bit? It’s still a literary hub of life with so much left to give. Oh, I have goosebumps just thinking about it!

Natasha is a German-born Brit with a love for the unusual and a thirst for culture. Natasha loves to explore in her writing and experiment with different styles. She is a book addict and a petrol head. You can see more of her book selection on this profile.