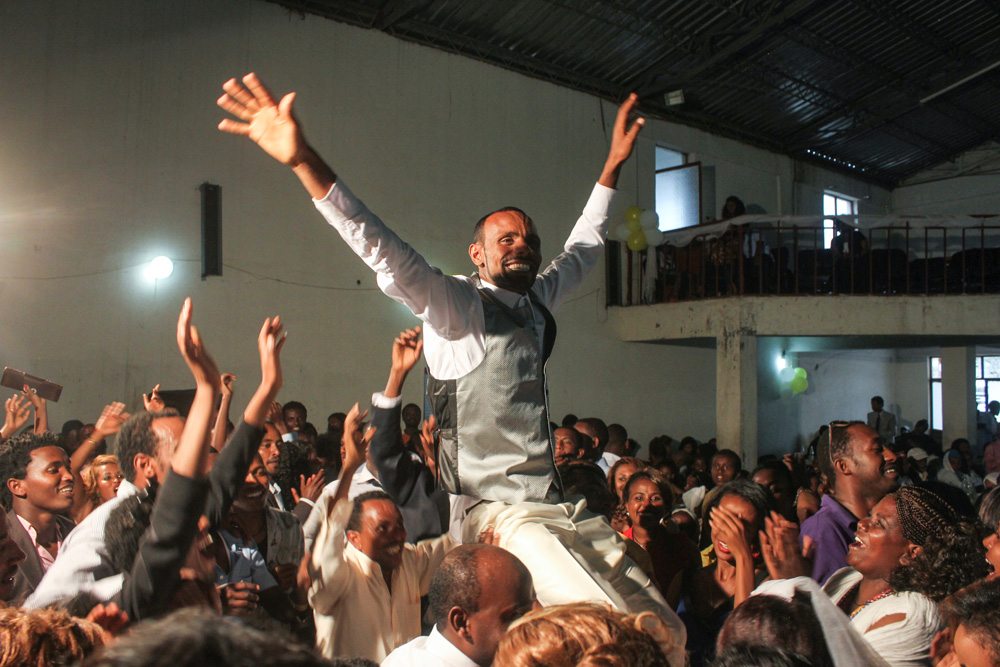 How to Party at an Ethiopian Wedding: The Unspoken Rules

If you stay in Ethiopia for long enough, it’s just a matter of time before someone invites you to a wedding. My first invitation came out of the blue—out of a blue cab to be precise. I had never met Marcos before but five minutes into our chat, he blurted out: “I’m getting married in two weeks! Would you like to come?”

“Of course!” I exclaimed.

Two weeks later I found myself in the big hall of a youth centre in the middle of the city. I was the only ferenji or foreigner there. The host near the door quickly shuffled me to the front of the room and sandwiched me between a group of women who would take it upon themselves to look after me for the rest of the night.

Having lived in Addis Ababa for less than a month, I didn’t speak a lick of Amharic; we communicated with smiles, hand gestures and funny faces.

They served us bottles of coca cola, water and what I thought was orange juice. I took a big swig of it before I realized this was not orange juice but tej, or home-brewed honey wine, which despite its name, has an extremely high alcohol content.

The women at my table shook their heads with disapproval and glared at me with eyes that said, “Don’t be the drunk ferenji at the wedding.” Tinish, they said. Just a little bit.

We waited for an hour before Marcos and his bride, Hirut, appeared in a storm of music, dancing and cheering. A caravan of bridesmaids and groomsmen led the way to the stage at the front of the room. Cameramen with bright lights followed every move. They were like Hollywood stars. 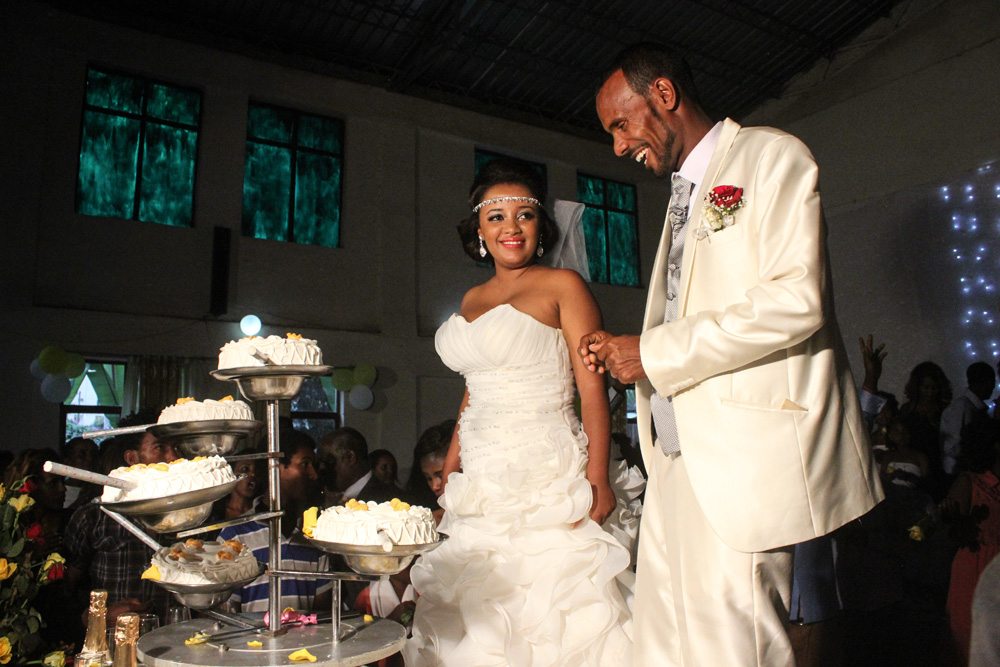 An Orthodox Christian priest said a brief prayer and blessed the couple before they sat down at a big table on the stage with their bridal party.

They did not sit for very long. Unlike a Canadian wedding, full of ceremony and vows and speeches, Ethiopian weddings move along quite quickly to the essential: food and dancing. They did not waste any time. A feast was waiting.

Marcos, his bride, Hirut, and their bridal party made their way to the buffet in the next room. The cameras and lights followed their every move as they filled their plates, sat back down and began feeding one another.

In Ethiopian culture, it is not unusual to watch people feeding each other. The tradition, called “gursha,” shows that you care about someone. Friends and family members can perform gursha for one another on any occasion, not just during a wedding. What is unique during a wedding is that all the guests will watch the bride and groom feed each other until they have finished their meals before they go to serve themselves. 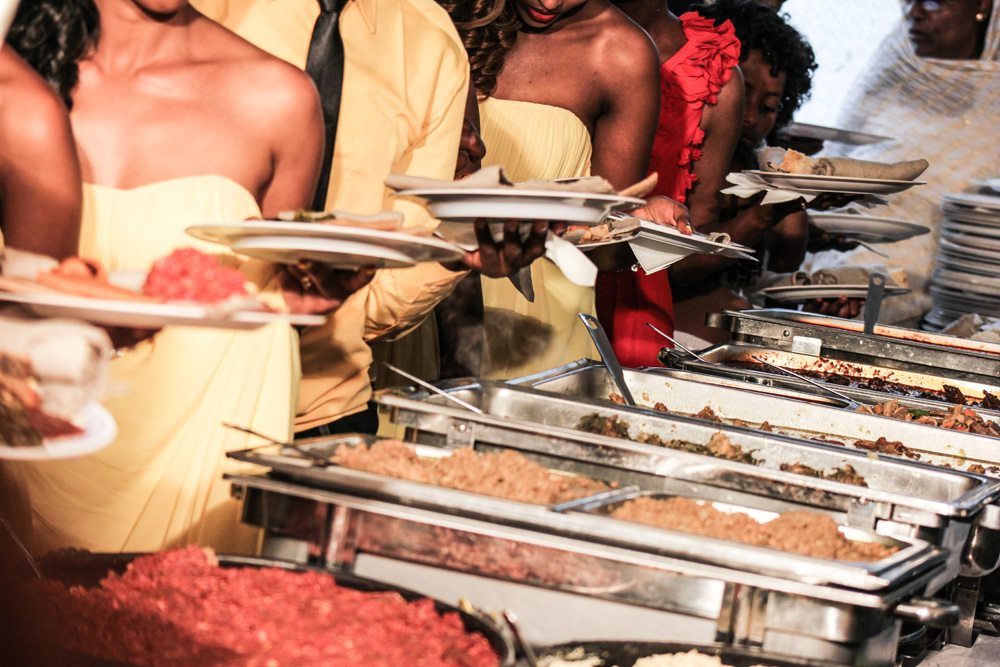 Once everyone is fed, the dancing begins. I had barely finished my plate when tables and chairs started disappearing to make room for the dance floor. The music blared and before long at least 100 people were up and dancing, shaking their shoulders to show off their best eskista moves.

Eskista is the traditional dance in Ethiopia. Although different regions and ethnic groups have different versions of eskista—some move their heads more, others put their hands on their hips, some dance with their hands together as if in a prayer—the key to eskista is that your shoulders and your neck do most of the dancing, your hips barely have to move.

The bride and groom didn’t skip out on the action. Before long their friends and family had hoisted them up on their shoulders and Marcos and Hirut were both crowd surfing. Confetti filled the air. It was epic. In that moment I decided that crowd surfing should be mandatory at weddings of all cultures.

The party was just getting wild when the cake arrived. The crowd split to make way for Marcos and Hirut, who gracefully walked up the stairs leading to the cake. Wild music filled the hall. Together, Hirut and Marcos cut the first slices of cake and fed one another. Finally, they exchanged rings. Champagne sprayed the air and the crowd erupted into dancing and cheering.

The cake was whisked away as the room turned to mayhem. I don’t remember when the party ended. 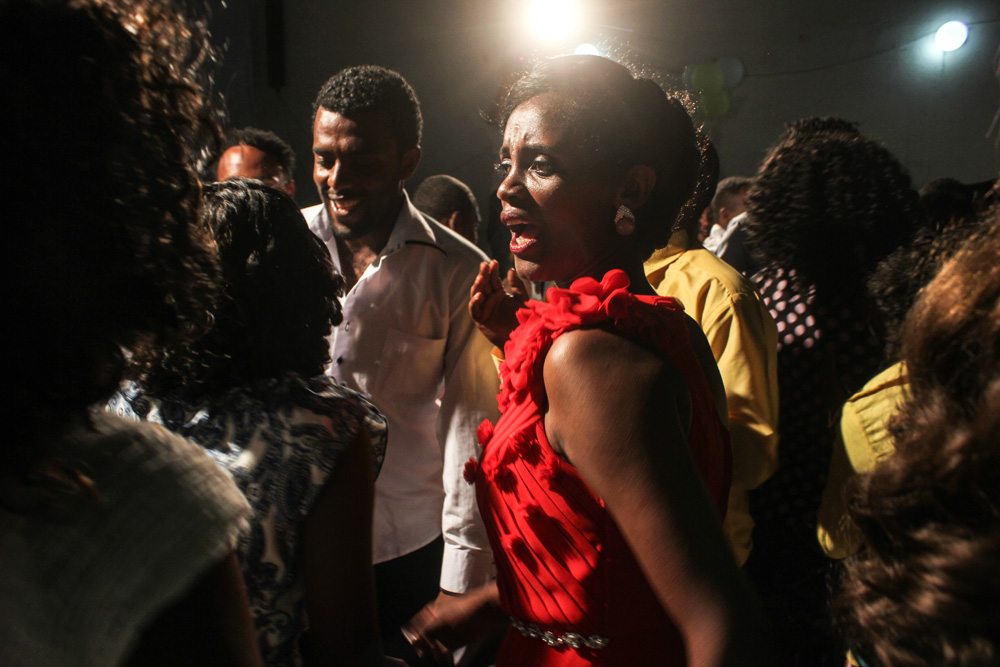 Here’s one thing I learned: if you are a ferenji, it does not matter if you can actually dance. Your failed attempts at eskista are guaranteed to entertain everyone around you. This is probably why they invited you. Young men and old ladies will challenge you to dance offs. You will get sweaty. You will have an incredible time. Your shoulders will hurt the next day.

So when you come to Ethiopia, if you would like to attend a wedding, you must remember these four rules of engagement:

1. Always be nice to your taxi driver
2. Don’t chug the tej—it’s not orange juice
3. Crowd surfing is always a good idea
4. Don’t disappoint your audience, dance like everybody is watching

A lifelong nomad, Candice Vallantin has lived in five cities and three continents. She was a journalist for five years before she switched to non-profit communications in 2012. She is currently based in Addis Ababa, Ethiopia, where she works as the Communications Officer for imagine1day. Find more of her stories and photos at www.myabyssinia.weebly.com